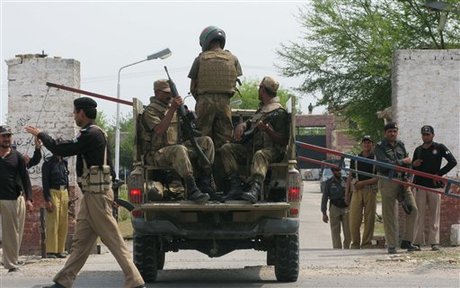 Taliban militants beheaded two Pakistani soldiers and hung their heads from wooden poles in a town in the country's northwest on Monday, a day after they killed nine soldiers in an ambush there, officials said.

The killings in Miran Shah, the main town in the North Waziristan tribal area, highlight the dilemma facing the Pakistani military in dealing with the most important militant sanctuary in the country.

North Waziristan is a key base for the Pakistani Taliban, which have waged a bloody battle against the government and its security forces over the past several years. But it is also a refuge for Afghan and Pakistani militants battling U.S.-led forces in neighboring Afghanistan who are believed to be close to the government in Islamabad.

The U.S. has repeatedly demanded that Pakistan launch an offensive against the militants conducting cross-border attacks from North Waziristan, especially the Haqqani network. Pakistan has refused, claiming its forces are stretched too thin fighting the Pakistani Taliban in other parts of the tribal region.

However, many analysts believe Pakistan is reluctant to target militants in North Waziristan with whom it has strong historical ties and who could be useful allies in Afghanistan after foreign forces withdraw.

But those militants are also closely allied with the Pakistani Taliban, the country's fiercest enemy.

On Sunday, the Taliban ambushed a security checkpoint in Miran Shah, killing nine Pakistani soldiers, the army said. Militants had been firing on the checkpoint for the past few days before they ambushed it, the army added.

The army retaliated with helicopter gunships, which pounded suspected militant hideouts and also hit three houses and a mosque in the town, said intelligence officials. Three civilians were killed and 20 were wounded in the helicopter attacks, they said. It's unclear how many militants were killed.

A Taliban commander said the military raided two houses in Miran Shah on Sunday night, killing a militant commander and several of his colleagues. The militants seized two soldiers during the raids, beheaded them and hung their heads in different parts of Miran Shah, said the commander.

The intelligence officials did not specify how the soldiers were seized, but confirmed that their heads were hanging from poles in Miran Shah.

The army has retrieved some of the bodies of the soldiers who were killed, and authorities are working with local tribal elders to try to get the militants to return the rest, said the officials.