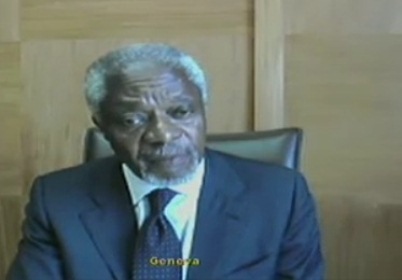 U.N.-Arab League envoy Kofi Annan said on Tuesday his peace plan could be the last chance to avoid civil war in Syria, where a truce has failed to end 14 months of bloodshed that monitors say has killed nearly 12,000 people.

Annan told the U.N. Security Council that the priority in Syria is "to stop the killing," and expressed concern that torture, mass arrests and other human rights violations are intensifying.

Regime forces "continue to press against the population," despite a putative truce that started on April 12, but attacks are more discrete because of the presence of U.N. military observers, diplomats quoted him as saying.

"The biggest priority, first of all we need to stop the killing," Annan told reporters in Geneva, adding that his six-point peace plan is "the only remaining chance to stabilize the country."

Annan briefed the council on his efforts to get President Bashar al-Assad to implement the plan, which he said was possibly "the last chance to avoid civil war."

He stressed, however, that the peace bid was not an "open-ended" opportunity for Assad, the diplomats who attended the briefing said.

U.S. ambassador to the U.N. Susan Rice said Washington's goal was still the removal of Assad.

"The United States remains focused on increasing the pressure on the Assad regime and on Assad himself to step down," Rice said.

"The situation in Syria remains dire, especially for the millions who continue to endure daily attacks and are in urgent need of humanitarian assistance," she told reporters after Annan's briefing.

British ambassador Mark Lyall Grant said Annan told the council he intends to return to Damascus in the coming days, only the second visit since his mission began earlier this year.

Annan updated the U.N. body on the status of his six-point plan, which includes a U.N. military observer mission, a day after U.N. chief Ban Ki-moon warned world powers are racing against time to prevent all-out civil war in Syria.

Annan said that the current 60 or so observers on the ground "have had a calming effect" and the deployment by the end of the month of a 300-strong team will see a "much greater impact."

There has been a decrease in military activities but there have been "serious violations" of the agreed ceasefire and there have also been attacks on government troops and facilities, he said.

"The need for human rights abuses to come to an end cannot be underestimated," he stressed.

"This is what the plan is all about."

The Syrian Observatory for Human Rights said almost 12,000, the majority of them civilians, have died since the revolt broke out in March 2011.

The Britain-based watchdog said of the total, some 800 had died since the truce was supposed to take effect.

On Tuesday, at least six civilians were killed.

The unrest has persisted despite the presence of U.N. observers monitoring the truce and parliamentary elections on Monday as part of the government's pledge to implement reforms.

The opposition boycotted the vote, denouncing it as a sham. The United States said the exercise was "bordering on ludicrous."

Turkish Prime Minister Recep Tayyip Erdogan said he was losing hope for a solution and urged the U.N. to bolster its observer mission to up to 3,000 rather than the 300 authorized under a Security Council resolution.

"The U.N. should bolster its mission to Syria with up to 3,000 observers to give a full picture of the situation in the country," Erdogan said.

"We support the Annan plan but if someone were to ask me what my hopes are, I would say I have lost hope."

The United Nations has accused both the Syrian regime and rebels of violating the truce, and China urged all parties to honor their commitments.

"All parties in Syria must abide by their ceasefire commitments, support and cooperate with the work of the U.N. supervision team, to create the conditions to launch an inclusive political process as soon as possible," Foreign Minister Yang Jiechi said during a visit by opposition Syrian National Council chief Burhan Ghalioun.

The International Committee of the Red Cross appealed for 20 million euros ($26 million) to step up its aid to Syria, warning that the humanitarian costs of the conflict were continuing to mount.

The group has been working alongside the Syrian Arab Red Crescent to bring humanitarian relief to about 1.5 million people affected by the bloodshed.

Assad has no where to go once he is deposed in Syria. This is why no one should expect him or his gang to voluntarily step down.
They will fight even if they have to destroy all of Syria because they have no escape.
Unless there are some serious external military actions against the regime the fight in Syria will drag and will divert from a freedom movement to becoming a sectarian conflict.

That is already happening, but the regime will be realisticaly dead in 1-2 years even if technicaly alive. The government institutions are slowly but surely eroding. The regime does not the oil wealth of iraq or libya, it is really doomed versus time. I do agree that intervention will speed up the process and ease the post assad syria, otherwise syria will be a failed state with major reprecussions on lebanon.

Really? One has not already started? Annan has only given Assad some running room to kill off more Syrians before they can get funded and armed to end his murderous regime.
There is no moral equivalency between the use of force to commit murder and the use of force to stop a murderer. The former is criminal and the latter is justifiable homicide.
Those who seek to draw an equivalency malign the Syrian Opposition and provide justification for the inexcusable acts of genocide and crimes against humanity that have become the order of the day for the Assad Regime.
When the international media start reporting that Syrian casualties have exceeded 10,000 deaths, then there will be action. In reality, the casualty toll is probably 15k but is reported at 9k and holding. All life, particularly the lives of those seeking freedom, is precious. It should not take 10,000+ Syrian lives to justify the response that a scratch on the leg of an Israeli child would provoke.

Give up the charade Annan. Maybe the gave you one last change. But even with 300,000 observers you can't stop a psychopathic mass muderer.

The problem in our Middle East is that the great majority of the population are either religious fanatics or autocratic in nature. Moderation and true mental cultivation are a rarity. So what is happening is that after every change the victims of the past become the oppressors of the future. It will take a miracle to have a Government for the people that protects the rights of all..... but miracles sometimes do happen, so I will keep my fingers crossed hoping for one.

with all my respect for Annan, civil war will not happen in Syria unless he knows that the super powers are aiming for this to happen. foe annan's memory and noting, syria is almost entirely Sunni with scattered minorities that live side by side with their fellow Sunnis. Civil wars happen when there is split numbers like in lebanon. syria will not be the same again. Syria will wither be dominated by Assad if he succeeds in crashing his opponents which I doubt it, or will become democratic. The Syrian are not like the Lybiyan; they are rational people and have many of their citizens who made it big abroad. Syria could become a country of great importance if governed democratically. Likewise, Syria and Lebanon could regain their dominance in the ME after Syria becomes democratic.