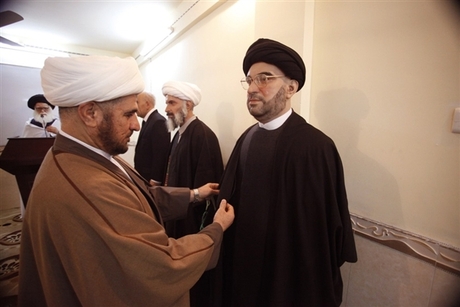 Some of the most famed Shiite clerics of modern times have gathered together in a modest room under a religious school in Najaf in central Iraq -- as wax figures, waiting to be put on display.

The 20 likenesses depicting people who studied, lived or were born in Najaf, most of them clerics, are arrayed around the walls of the carpeted room, with fans protecting them from the heat.

Another statue is in a room upstairs, while 38 more are on order from an artist in Iran and are due to arrive in the coming weeks.

All be eventually be showcased in a special museum in Najaf that will also contain books and documents related to the personalities on display. But for now, they remain in storage.

Najaf is the main center of Shiite religious scholarship in the world, and is a holy city for Shiite Muslims because Ali bin Abi Taleb, the first Shiite imam and the son-in-law and cousin of the Prophet Mohammed, is buried there.

The wax statues are detailed likenesses of the men's faces, hands and beards, with some even dressed in clothes that the personalities actually wore during their lifetimes.

One depicts Grand Ayatollah Abu al-Qassem al-Khoei, the top Shiite cleric in Iraq before his death in 1992, seated in a chair.

Khoei opposed the involvement of Shiite clerics in politics.

He was against Ayatollah Ruhollah Khomeini's doctrine of velayat-e faqih or the "rule of the jurist," that saw clerics take power in Iran after the 1979 Islamic revolution that ousted the U.S.-backed shah.

Another figure is of Grand Ayatollah Mohammed Baqr al-Sadr, who is posed sitting on the ground writing.

He was a staunch opponent of Saddam Hussein's regime and the founder of the Islamist Dawa party which Iraqi Prime Minister Nuri al-Maliki now leads, and he also backed the 1979 revolution in Iran.

Mohammed Baqr, who was executed along with his sister in 1980, opposed Khoei's "quietist" approach of avoiding political involvement.

Another likeness is of his cousin Grand Ayatollah Mohammed Sadiq al-Sadr, who built the Sadr Movement which gave his son, cleric Moqtada al-Sadr, enormous influence following the 2003 U.S.-led invasion of Iraq.

Mohammed Sadiq -- shown standing at a podium as though he were about to speak -- also ran afoul of Saddam and was killed along with two of his sons by gunmen in 1999.

Not all of the statues are of clerics, however.

One is of famous Iraqi poet Ahmed Al-Safi, who was born in Najaf.

Another is of Abdelrazzaq Mohieddin, a professor originally from south Lebanon who was involved in establishing publishing houses in Najaf and developing educational institutions there.

"These statues were made in order to show appreciation and focus on the role of these notables and famous personalities," said Furqan Ali Merza, head of the project and an official in the religious school where the statues are housed.

"We selected 59 personalities from different religious, cultural and literary fields," he said, adding that the Hawza, the Shiite clerical community, received the largest share.

The project began in September 2011, he said, with an initial selection of 300 personalities, a number that was later trimmed to 150.

For budgetary reasons, however, that number was later reduced even further, eventually ending up at 59 statues.

The 550 million Iraqi dinars (about $458,000) in funding came from the budget of a problem-plagued project for Najaf to be the Islamic capital of culture, which was postponed earlier this year.

But the statues project is still going ahead.

Wax museums are not common in Iraq, and it is rare to find wax likenesses depicting Muslim religious figures anywhere in the world.

Making full statues of people is frowned upon in Sunni Islam, but Shiite Islam is more lenient about photography, paintings and depictions of respected personalities.

Sheikh Ali Merza, Furqan's father who is responsible for the religious school, said that the wax statues project faced "criticism at the beginning," but did not elaborate on what kind of opposition or from whom.

As a "first step, we checked the religious law and found no prohibition in implementing our project. Every new thing faces resistance, and the criticism of our project was spoken without awareness," he told AFP.

Sheikh Sadiq al-Hesnawi, deputy head of the cultural committee in the office of Moqtada al-Sadr, two of whose relatives are depicted, said that "the museum preserved some personalities who had influence in Najaf, and represents the interest of Iraqi society in those figures."

"We support these steps and praise them," he added. "We think it is like rewarding these figures."