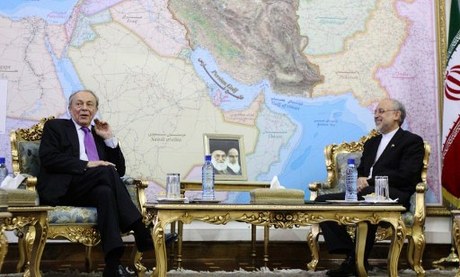 Ali Akbar Salehi "welcomed the victory of Francois Hollande and hopes to see a new approach taken between Tehran and Paris in all areas based on mutual respect" during their meeting in Tehran late Friday, the official IRNA news agency reported.

Socialist leader Hollande, who will be inaugurated on Tuesday having defeated Nicolas Sarkozy in a run-off for president on May 6, has distanced himself from Rocard's visit.

Rocard "is not carrying any message nor has he been vested with any mission" by the French president-elect, a member of his entourage told Agence France Presse on Saturday, adding it was a "private visit."

"The position of Francois Hollande on the Iranian nuclear program is known," said the diplomat.

"Iran must comply with its international obligations and abide by the resolutions of the U.N. Security Council to cease nuclear activities without credible civilian purpose."

Rocard arrived in Tehran early Saturday on an unofficial three-day visit first planned for April but postponed after the 81-year-old was hospitalized in Stockholm in late March.

His visit comes as Iran is preparing for a new round of talks with world powers in Baghdad on May 23 that will focus on the disputed nuclear drive.

France under Sarkozy was the strong voice in the European Union to advocate harsh U.S.-backed economic sanctions against Iran over Western suspicions it seeks a weapons capability masked by its civilian nuclear program.