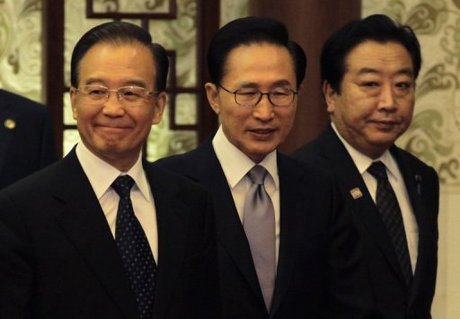 The leaders of China, Japan and South Korea agreed Sunday to start talks this year on a free-trade area, saying it would boost the economies of the entire region.

"Northeast Asia is the most economically vibrant region in the world. So there is huge potential for our three countries to have closer trade and investment cooperation," Wen told reporters in Beijing.

"The establishment of a free-trade area will unleash the economic vitality of our region and give a strong boost to economic integration in East Asia."

China, Japan and South Korea combined have the world's largest economy, ahead of the European Union, when measured by purchasing power parity.

Wen made the remarks after meeting in the Chinese capital with South Korean President Lee Myung-Bak and Japanese Prime Minister Yoshihiko Noda.

In Sunday's meeting, the three nations also signed an investment agreement concluded earlier this year after 13 rounds of negotiations stretching over five years.

A free-trade area among Northeast Asia's three major economies has been on the trilateral agenda for the past decade, beginning with an agreement among the three in late 2002 to launch a feasibility study on the issue.