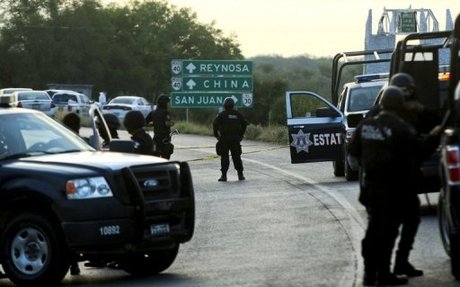 Mexican police on Monday searched for perpetrators of a drug-war massacre in which 49 people were killed, decapitated, dismembered and left in plastic bags on the side of a highway.

The mutilated corpses, whose hands had been cut off to prevent fingerprint identification, were discovered close to the northern city of Monterrey, 180 kilometers from the U.S. border.

The bodies stacked up at the roadside were of 43 men and six women, said Jorge Domene, a public safety spokesman for the state of Nuevo Leon.

Adrian de la Garza, a prosecutor in Nuevo Leon state, said some of the bodies in Sunday's shocking find were naked and, although their hands had been cut off, forensic experts were collecting DNA samples.

A note was found at the scene in which the Zetas -- a gang set up by ex-commandos who deserted in the 1990s -- claimed responsibility.

Initial investigations indicated that the victims were killed up to 48 hours earlier in a different location, and were likely transported by truck to where they were found.

"The grisly find was part of what has been happening in the country in general," said Domene, pointing to other mass killings.

"It is a continuation of what has already happened recently in Nuevo Laredo, a few weeks ago in Jalisco and a few months ago in Veracruz."

De la Garza argued the victims could be residents of a different state or migrants from other countries transiting through Mexico on their way to the United States.

Thirteen Salvadoran nationals were among the 72 people killed by the Zetas gang in Tamaulipas in August 2010.

"We condemn in the most energetic form the massacre of 49 people in Nuevo Leon... which becomes part of a series of violent acts perpetrated in this region," said a statement by the Salvadoran foreign ministry.

The gruesome discovery came just days after police found the dismembered, decapitated bodies of 18 people in two abandoned vehicles in western Mexico, in what appeared to be a revenge killing involving powerful drug gangs.

Just a few days earlier, there were 23 killings in the city of Nuevo Laredo, in Tamaulipas state, which borders the United States, with nine people found hanging from a bridge and 14 others decapitated.

On Friday, gunmen attacked the offices of El Manana newspaper in Nuevo Laredo, even though the newspaper long ago stopped reporting on cartel violence out of fear.

The gunmen sprayed the building with high-caliber ammunition and tossed a homemade grenade at the building as the news staff worked to finish the next morning's edition. Amazingly, no injuries were reported.

In Tamaulipas, the cartels are fighting for control of a corridor that leads to U.S. Interstate 35, a highway known as one of the most lucrative routes for drug and human smugglers.

Authorities have blamed much of the violence on battles between the Zetas and groups allied to the Sinaloa Federation of Mexico's most wanted drug lord, Joaquin "El Chapo" Guzman.

The state of Veracruz has become a battleground between the Zetas and Guzman's Sinaloa grouping, and journalists have also been targeted.

Last week, the dismembered bodies of three photographers and a news company employee were found, wrapped in plastic bags, in a canal in the metropolitan area of Veracruz, a port city on the Gulf of Mexico.

Several days earlier the Veracruz state correspondent of the national weekly news magazine Proceso was found strangled in her home.

Late last year, 96 bodies were dumped in public squares and alongside roads in the eastern state in a three-week period, with most of the killings attributed to the rivalry between the Sinaloa cartel and the Zetas.

More than 50,000 people have been killed in drug-related violence since President Felipe Calderon launched an all-out war against the nation's drug gangs on taking office in December 2006.

Earlier this month, 15 bodies were also discovered on the road to Chapala, Mexico, a popular retirement community for U.S. citizens in Jalisco state.