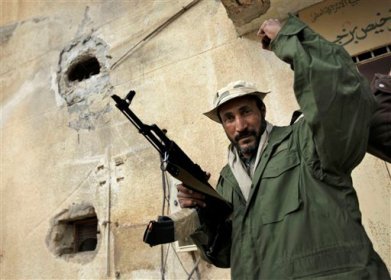 "Our raids are forcing the terrorists to flee. We have liberated Zawiyah, Uqayla, Ras Lanuf and Brega and the army is advancing to liberate the rest of the regions," he said.

"Tonight or tomorrow you will get news" of the progress made by the troops.

Asked about a possible offensive against the rebels in their stronghold of Benghazi in eastern Libya, Hussein said: "These are rats and terrorists who flee in the face of the raids of the people and volunteers.

"We won't need a real armed offensive," he said.

Outgunned insurgents seeking to end Gadhafi's 42-year iron-fisted rule have been driven out of several key oil cities and towns along the Mediterranean coast in recent days by troops loyal to Gadhafi.

But they still hold Misrata, the country's third city, between Tripoli and Gadhafi's birthplace of Sirte.

Misrata, 150 kilometers east of Tripoli, "is under the control of the terrorists," said Hussein. "We will soon purge this city as well."

Deputy Foreign Minister Khaled Kaaim told reporters that a number of "Islamist terrorists" had been arrested in Zawiyah -- 40 kilometers west of Tripoli.

He identified one suspect as Mohammed Hamadi, and said he is a leading member of Mauritania's Muslim Brotherhood. "We have received a request from Nouakchott for his extradition," Kaaim said.

Zawiyah, a prosperous dormitory town of 250,000 inhabitants and home to many military officers, was retaken by Gadhafi loyalists on Wednesday night at a cost of 14 lives on both sides, Kaaim said earlier this week.

The Libyan leader has repeatedly blamed al-Qaida of stirring the rebellion against his regime and vowed he will "fight to the end" -- despite international condemnation of the violence and threats of sanctions.

And on Saturday his son Seif al-Islam said in remarks published by Italian newspapers that 95 percent of the country was now under the control of the armed forces.

Gadhafi forces were shelling the strategic oil city of Brega on Sunday, an Agence France Presse correspondent said, after seizing the town of Uqayla and the village of Bisher, near Brega, as they pushed towards Benghazi.