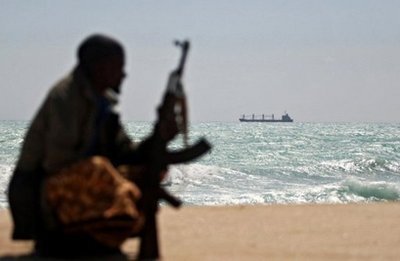 The Indian navy has captured 61 suspected Somali pirates and rescued 13 fishermen after a firefight with a pirate mother ship in the Arabian Sea, a navy spokesman said Monday.

"A total of 74 men have been apprehended of which 61 are suspected to be Somali pirates," Indian navy spokesman P.V.S Satish said, adding the incident happened on Saturday night within Indian waters.

A total of 13 fishermen on board the mother ship, a Mozambique-flagged fishing boat, were rescued after the firefight that took place 1,100 kilometers from the west coast of India.

The Vega 5 fishing boat was hijacked December last year and was being used as a base for the pirates, who were found with small arms as well as rocket-propelled grenades and fuel drums.

A statement from the navy said its fast-attack craft, the INS Kalpeni, directed "limited" fire on the vessel after being shot at.

Last month, India warned of an increased threat to shipping off its southwest coast, as Somali pirates hunt targets beyond African waters to evade the clutches of an international naval force.

There has been a rise in pirate attacks on merchant vessels within Indian waters recently and shipping has been warned to steer clear of danger areas, according to the Indian Coastguard.

Fifteen suspected pirates -- 12 Somalis, two Ethiopians and a Kenyan -- face trial in India on charges including attempted murder after they were caught in January.