Kremlin: G8 at Odds over Syria 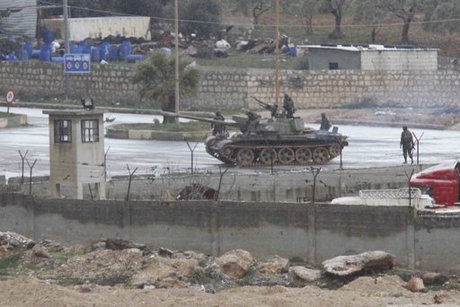 There is still no agreement among leaders of the world's richest nations on the final text of a declaration that will touch upon the protracted conflict in Syria, a Kremlin advisor said Thursday.

The leaders of the G8 -- Britain, Canada, France, Germany, Italy, Japan, Russia, and the United States -- will meet Friday and Saturday for a summit at the Camp David presidential retreat near Washington.

Russia will be represented by Prime Minister Dmitry Medvedev after Vladimir Putin, the newly inaugurated president and the country's paramount leader, raised eyebrows in the West by suddenly cancelling his visit.

"There are differences," Kremlin advisor Arkady Dvorkovich told reporters, referring to the text of the G8 final declaration. "We are continuing our work."

At international summits, the Kremlin, which cautions against intervention in domestic affairs of conflict-ridden countries like Syria and Libya, frequently finds itself at odds with the rest of the G8.

Dvorkovich reiterated Russia's position that the international community should send a "strong signal" not only to the Syrian government but also to the opposition.

"The G8 should give a strong signal to all conflicting parties about the way we believe one needs to act for the situation to become safe for everyone," Dvorkovich told reporters.

"A unilateral signal is unacceptable for us," he said.

Putin's abrupt cancellation of the trip -- which would have made it his first foreign trip abroad after his May 7 inauguration -- has shocked many in the West.

The Kommersant newspaper reported Thursday, citing U.S. sources, that Medvedev's talks with U.S. President Barack Obama had been sharply downgraded by the U.S. side after Putin's non-show.

Dvorkovich dismissed the idea of the downgrade, calling the issue "inappropriate".

"All the leaders are ready to work with Russia's prime minister in a full-fledged format at the G8 summit," he said, adding the bilateral meeting had no pre-planned agenda.