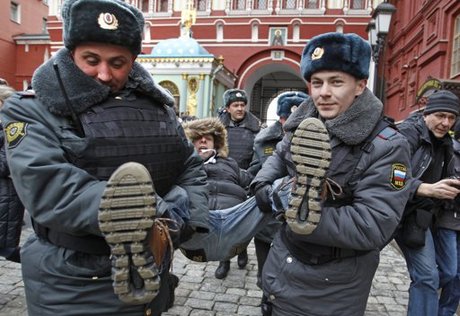 Russia's parliament on Friday postponed a debate on a controversial bill that would massively hike fines for unsanctioned protests after opposition parties threatened a boycott.

The Duma lower house was due to debate the bill in its first reading Friday, but speaker Sergei Naryshkin announced it would be postponed until Tuesday after meeting the leaders of the four parties, RIA Novosti reported.

The draft law proposed by deputies from the ruling United Russia party calls for a maximum fine of 1.5 million rubles ($48,000) for protest organizers compared with 50,000 rubles now.

The bill clearly aims to crack down on the opposition movement to President Vladimir Putin's return to the Kremlin, which is currently testing a tactic of organizing unsanctioned sit-ins and marches.

The financially punitive measures would be far beyond the means of the largely young protest contingent and may deter people from attending rallies that are regularly broken up by riot police with mass detentions.

It has been criticized by Prime Minister Dmitry Medvedev, who said Thursday: "We need to change ourselves and not just make harsher punishments."

The leader of the Communist Party, the largest opposition party, Gennady Zyuganov, had said his deputies would stage a walkout if the bill was debated in its current form.

"We are going to work on this document," he said Friday, cited by RIA Novosti, calling the bill a "provocation."

Sergei Mironov, the leader of A Just Russia, said his party categorically opposed the bill and planned to vote against it next week.

The leader of the nationalist Liberal Democratic Party of Russia, Vladimir Zhirinovsky, said his deputies would abstain from voting on the bill, but did not confirm a walkout.

On Friday, the Constitutional Court also issued a ruling that organizers of protests should not be fined automatically when the attendance of rallies exceeds the limit -- as currently happens -- unless this creates a real threat.