Australia to Seal Trade with Malaysia This Week 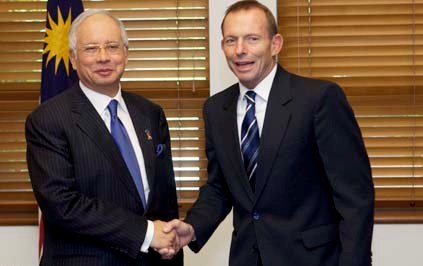 Australia will sign a free trade agreement (FTA) with Malaysia this week which officials said Monday they hope will help fast-track ongoing talks with China, South Korea and Japan.

Trade Minister Craig Emerson is set to pen the deal in Kuala Lumpur on Tuesday, his office said, giving Australian companies unprecedented access to one of Southeast Asia's biggest economies.

Australia has several similar agreements, including with Singapore, Thailand and the United States, and bilateral negotiations with China, Japan and South Korea are under way.

Emerson said he believed the Malaysia deal would act as "an indication to countries like Japan, China, Korea and Indonesia that we are serious about seeking to conclude high-quality FTAs".

"Such agreements can generate momentum for further deals, providing a head-turning effect from other countries," he told The Australian, adding that Mexico and Colombia had also shown interest in talks.

Under the liberalization agreement with Malaysia, 97.6 percent of tariffs on Australian goods sold there will be eliminated at once, Emerson's office said, and will rise to 99 percent by 2017.

The services sector will gain increased access to the market, including the ability to become majority owners in Malaysian businesses.

In return, Australia will accelerate the removal of tariffs which was due to happen by 2020 but will now occur immediately.

"The signing of this FTA will open a new chapter in Australia's relationship with Malaysia," Emerson said in a statement.

"The FTA builds on an already-solid commercial partnership by embracing services and investment, where Australian companies will increasingly engage with Asia in this, the Asian century."

Malaysia is an important economic partner and regional neighbor for Australia and the agreement would culminate negotiations that began in 2005.