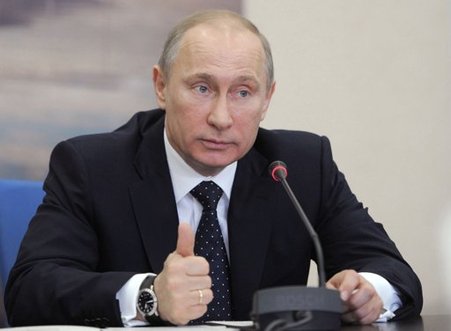 President Vladimir Putin put his stamp on a new government Monday that kept his most trusted allies in charge of finance while leaving tested veterans at the helm of foreign affairs and defense.

But the cabinet also left some room for open-market reformers, with the appointment of a liberal aide of current premier and Putin's predecessor Dmitry Medvedev to a key industry post.

"The situation the world economy finds itself in today is uncertain. There are a lot of uncertainty factors," Putin told his new government in televised remarks.

"You will have to implement Russia's development program in these conditions."

Putin's crushing victory in March elections sparked immediate fears of a return to the confrontational tone with the West that characterized much of his 2000-2008 presidency.

The former KGB spy and his protege Medvedev went on to complete a controversial job swap after the polls that will stretch Putin's 12-year domination until 2018 and was one of the primary triggers for a series of mass protests in recent months.

Many of the faces in Russia's new cabinet featured in the outgoing government while some of those not making the cut are expected instead to move over to Putin's Kremlin administration.

Russia's current energy czar Igor Sechin -- viewed as one of Putin's most powerful and trusted allies -- left Medvedev's cabinet but was still expected to keep broad influence over industry and future oil and gas deals.

He was recently nominated to the board of the state oil firm's natural gas unit and has been mentioned for a post as a possible Putin adviser in the Kremlin to orchestrate industrial issues.

The hawkish Sechin and Medvedev's aide Dvorkovich have clashed previously over the pace at which Kremlin-controlled banks and industries should be sold off to private investors in a bid to stimulate Russia's stalling growth.

The government's makeup had been kept under wraps for two weeks in an unusual departure from the earlier practice of instant appointments.

The delay has provided Putin with an excuse for skipping a G8 summit hosted by U.S. President Barack Obama last week -- a move the Kremlin insisted was not a slight for Washington's criticism of Russia's record on right issues.

Medvedev went to Camp David in Putin's place and told reporters over the weekend that the government's appointments needed careful study because they would include fresh faces.

But analysts said the appointments did little to encourage reforms because Putin was still likely to keep a tight reign on most financial and business decisions.

Economists at Alfa Bank said earlier in the day the appointments indicated "a strong focus on maintaining the balance of power between the president and the prime minister rather than forming a proactive team of economic reformers.

"As a result, even if the new Cabinet contains a number of strong economists, this will not necessarily simplify implementation of the economic agenda."