Gadhafi's Son to Sarkozy: Give Us Back Our Money 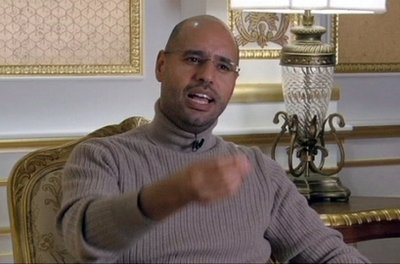 Libyan leader Moammar Gadhafi's son on Wednesday told "this clown" French President Nicolas Sarkozy to "give us back our money" allegedly used to finance his 2007 election victory.

Seif al-Islam told Euronews that "we have all the details and are ready to reveal everything" as Gadhafi's forces closed in on rebels in the eastern city of Benghazi who France recognized as Libya's legitimate representatives.

"Sarkozy must first give back the money he took from Libya to finance his electoral campaign," Gadhafi's son said when asked about France, which has along with Britain been leading calls for military intervention in Libya.

"We funded it and we have all the details and are ready to reveal everything. The first thing we want this clown to do is to give the money back to the Libyan people.

"He was given assistance so that he could help them. But he's disappointed us: give us back our money. We have all the bank details and documents for the transfer operations and we will make everything public soon."

The French presidency denied the allegation.

Libya's state-run news agency Jana reported recently that it would soon publish a "grave secret" that would lead to Sarkozy's downfall.

Moammar Gadhafi himself said on Tuesday that his "good friend" Sarkozy had "gone mad."

"He is my friend but I think he has gone mad. He is suffering from a psychological illness," Gadhafi told German television.

"That is what people say who are close to him. His aides say that he is suffering from a psychological illness."

Asked about the rebellion, Seif al-Islam dismissed looming U.N. Security Council action saying that "within 48 hours everything will be finished" and telling rebels they would have safe passage to leave the country.

"We don't want to kill, we don't want revenge, but you, traitors, mercenaries, you have committed crimes against the Libyan people: leave, go in peace to Egypt."

"Military operations are over. Within 48 hours everything will be finished. Our forces are almost in Benghazi. Whatever the decision, it will be too late."