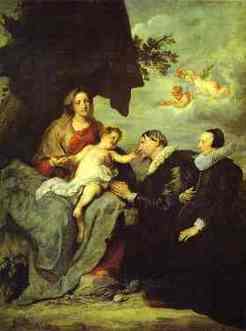 "The Virgin and Child" depicts the Virgin Mary with the baby Jesus in her arms watched by Mary Magdalene, King David and the Prodigal Son.

It had lain in the basement of the San Fernando Royal Academy of Fine Arts in Madrid for more than a century and was believed to be a copy, Spain's leading daily El Pais said.

But restorers have since last July undertaken a painstaking study of the work using pigment and X-ray analysis, and confirmed it to be the work of Van Dyck.

The picture, painted around 1625, was originally part of the collection of the Duke of Medina de las Torres, the Spanish Viceroy of Naples.

In the middle of the 17th century it was transferred to the monastery of El Escorial outside Madrid, where it survived the pillaging of the Napoleonic invasion of 1808.

Sometime later, it was taken to the San Fernando academy.

A self portrait by Van Dyck painted in the last months before he died sold for 8.3 million pounds (9.5 million Euros/$13.4 million) at auction in London in 2009.