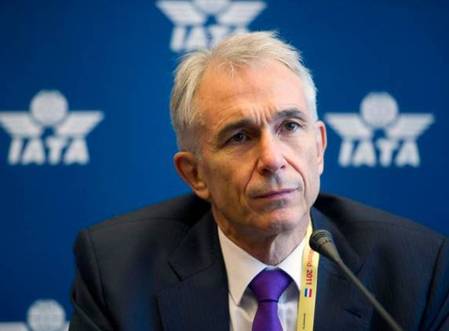 Tony Tyler, head of the International Air Transport Association, also hit out at a controversial carbon tax scheme put in place by the European Union, lashing it as a "polarizing obstacle to real progress".

Tyler told the group's annual general meeting in Beijing that "2012 is another challenging year. We expect revenues of $631 billion but a profit of just $3.0 billion".

Tyler cited the cost of oil as one of the main reasons for "anemic global profitability" -- with the group expecting an average of $110 a barrel this year -- and warned volatile political situations could push up prices.

But he added: "The biggest and most immediate risk ... is the crisis in the Eurozone. If it evolves into a banking crisis we could face a continent-wide recession, dragging the rest of the world and our profits down."

In a statement released as the AGM began Monday, IATA said it had downgraded its outlook for European airlines in 2012, projecting losses of $1.1 billion compared with its previous forecast of $600 million in losses.

The estimate comes despite figures showing 5.6 percent year on year growth in European passenger traffic in April and predictions global passenger numbers would rise to nearly 3 billion this year compared 2.8 billion in 2011.

"For European carriers, the business environment is deteriorating rapidly, resulting in sizeable losses," Tyler was quoted as saying in the statement.

But he added that the global picture was "diverse", with carriers in North and Latin America expected to see improved prospects from 2011, compared with airlines in Europe, Asia-Pacific and the Middle East.

According to IAEA estimates, North American carriers are likely to post profits of $1.4 billion in 2012, a slight improvement on the previous year due to strict management of airline capacity.

Carriers in Asia-Pacific and Middle East, however, are expected to see profits drop by more than half.

Tyler also blasted a controversial carbon tax that the European Union is trying to impose on all airlines -- a move that has sparked a backlash from the United States, China, Russia, India and European carriers.

Airlines flying to, from or within the European Union are required to monitor CO2 emissions for entire journeys and, if necessary, pay for exceeding their carbon allowances.

The scheme is "a polarizing obstacle that is preventing real progress. Our host country, China, is at the forefront of the opposition to the European ETS (Emissions Trading Scheme). Its carriers are forbidden from participating", Tyler said.

Beijing has repeatedly said it opposes the EU plan, and has banned its airlines from complying with the scheme, with state media warning it could lead to a "trade war" in the sector.

But the EU has said the carbon tax will help it achieve its goal of cutting emissions by 20 percent by 2020 and that it will not back down, despite claims the charge violates international law.