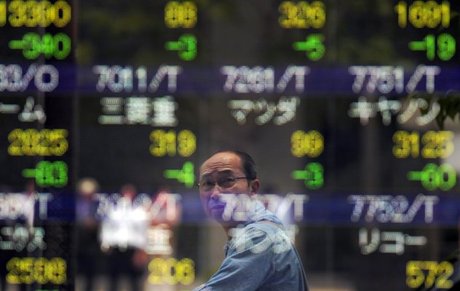 Asian markets and the euro rallied Monday after the eurozone agreed to lend Spain up to $125 billion to save its banks, but analysts warn the deal is just a sticking plaster for Europe's wider problems.

The weekend also saw China release a mixed bag of data that, despite not being as bad as expected, was unable to soothe dealers concerns over the world's second biggest economy. But it did provide hope that Beijing will introduce more easing measures.

Sydney was closed for a public holiday.

After an emergency video conference lasting more than two hours on Saturday, eurozone finance ministers issued a statement saying they were "willing to respond favorably" to a Spanish plea for help for its stricken lenders.

Spain's Economy Minister Luis de Guindos insisted the handout was not a rescue but a loan that imposes conditions on the banks.

However, it marked a dramatic climbdown for Madrid, which recently denied it needed any outside aid.

"It is a very clear signal to the market, to the public, that the euro (area) is ready to take decisive action in order to calm down market turbulence and contagion," Rehn said.

In the first few minutes of trade Madrid soared 5.8 percent, with Bankia -- the lender that asked the government for billions of dollars in aid -- rocketing almost 20 percent.

Monday's surge in the stock markets marked a rebound from recent weeks as traders have become nervous about Spain's precarious financial position as well as a possible Greek exit from the euro area.

The deal was hailed by Germany, France, Japan, China and the United States as well as the International Monetary Fund.

"Sentiment is in a risk-on mode and the news is giving the market a sense of relief," Kengo Suzuki, currency strategist at Mizuho Securities, said.

But Goldman Sachs warned that there were still problems in the Eurozone’s financial system.

"(It's a) positive near-term development for Spain, and in particular for its banks. But it does not solve Spain's overall fiscal and macroeconomic challenges, which remain substantial", Goldman said in a research note.

It added that the region's crisis "continues to be addressed on a country-by-country basis rather than at a systemic level".

Yuji Saito, director of foreign exchange at Credit Agricole Bank in Tokyo, said questions also remained about details of the bank deal, as uncertainty looms over Greek elections aimed at ending a political stalemate in the debt-riddled nation.

"The agreement won't solve the debt concerns completely because the question remains how and who will give money to Spain, and of course the Greek election next week," Saito told Dow Jones Newswires.

Despite efforts by policymakers, the Eurozone crisis has now spread to the region's fourth-biggest economy -- Spain's is twice the combined size of those of Greece, Ireland and Portugal, which have also needed a bailout.

Spain finally sought aid as its borrowing costs on the open markets soared and the price for fixing the banks' balance sheets, heavily exposed to a property bubble that burst in 2008, spiraled.

In China the government said Saturday that inflation eased to a slower-than-forecast 3.0 percent in May while industrial output grew at 9.6 percent year-on-year, also weaker than expected.

And on Sunday figures showed that exports and imports shot up 15.3 percent and 12.7 percent respectively last month.

The numbers will give policymakers room to ease monetary policy further and come days after Beijing cut interest rates for the first time since the end of 2008.