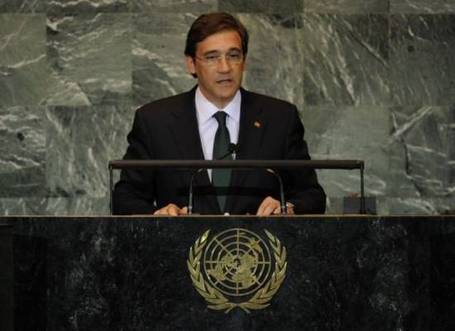 A deal for Europe to rescue Spain's stricken banks raised questions Monday in neighbor Portugal, struggling to stick to the tough conditions set in its own bailout accord and hoping for some respite.

Centre-right Prime Minister Pedro Passos Coelho insisted Lisbon must stick to the terms of its 78-billion-euro EU-IMF agreement but the Spanish deal, aimed exclusively at the banks, imposes no austerity or reform demands on Madrid.

"There is no reason to ask for new terms," Passos Coelho said Sunday.

However, "if there is some exceptional condition which should be shared by other bailed-out countries, I do not doubt that it will be," he added.

Greece was rescued in 2010 and then again early this year as the Eurozone debt crisis snagged Ireland and Portugal in turn, with the EU and International Monetary Fund setting stiff fiscal and reform targets for their help.

Economic daily Jornal de Negocios summed up what many Portuguese felt Monday over what it said was the unfairness of the Spanish accord, worth up to 100 billion euros ($125 billion).

"It is clear that the 100 billion euros is part of a bailout for Spain," it said, and not just a rescue of the banks.

The Spain accord helps country's banks and although it will be counted as part of the national debt, it carries no additional austerity or reform conditions beyond those Madrid has already put in place in an effort to stabilize its strained public finances.

The opposition jumped on the deal as unfair.

"There cannot be a system of first and second category states" in Europe, Socialist Party leader Antonio Jose Seguro said, calling on the prime minister to insist that "Portugal be treated the same as all other EU states."

On Saturday, the day the Spanish deal was agreed, an EU government source said Ireland wanted to renegotiate its 85-billion-euro rescue plan to get the same treatment as Spain.

Greece meanwhile goes into elections next Sunday deeply divided over its rescue terms, with the leftist Syriza party which wants the conditions dumped unceremoniously, neck-and-neck with the conservative New Democracy.

The European Commission was cautious on Portugal, with a spokesman cited as saying by the Diario Economico that it would be "very difficult" for Lisbon to review the deal because "there is no legal base for doing so."

"Portugal can not do anything on its own, hoping that those in charge (in the EU) will be kind enough not to forget us," he added.

Economist and business interests generally noted that Spain is a major trade partner for Portugal, whose economy is expected to shrink 3.0 percent this year, and so problems there could have a serious knock-on effect.

Others suggest that helping the Spanish banks should be positive overall for the country and held out the prospect of more aid for Lisbon if it needs to extend its own bailout.

"That gives a quasi-guarantee that if we respect the terms of the current accord, we will obtain new financing without conditions," said economist Joao Duque.

Passos Coelho stressed Sunday that he would ask for "neither more time, nor more money," and that he would respect all the terms of the rescue deal.