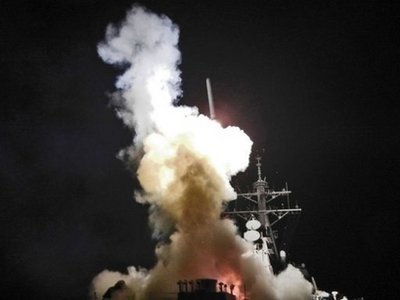 Libyan leader Moammer Gadhafi said Libya's people have been armed and are ready to fight a "long war" to defeat Western forces attacking his country, in a televised audio message on Sunday.

"All the Libyan people are united. The Libyan men and women have been given weapons and bombs ... You will not advance, you will not step on this land," said Gadhafi.

"We promise you a long, drawn-out war with no limits," said the Libyan leader, who was speaking on state television for a second straight day without appearing in front of camera.

The leaders of Britain, France and the United States would "fall like Hitler ... Mussolini," he warned. "All tyrants fall under the pressure of the populist masses."

"America, France, or Britain, the Christians that are in a pact against us today, they will not enjoy our oil ... You are aggressors, you are animals," said Gadhafi.

He added that his forces will not retreat from the battlefield.

The U.S., Britain and France bombarded Libya with missiles from air and sea overnight Saturday in a multi-national action against Gadhafi's forces under a United Nations Security Council resolution authorizing a no-fly zone.

Meanwhile, medics and Agence France Presse correspondents said at least 94 people were killed in an assault launched two days ago on the rebel-held city of Benghazi by forces loyal to Gadhafi.

"Yesterday we had about 50 (bodies of civilians and rebel fighters) and just today we issued about 35 death certificates," Doctor Khaled Mugasabi, a forensic pathologist at Benghazi's Jala hospital, told AFP.(AFP-Naharnet)