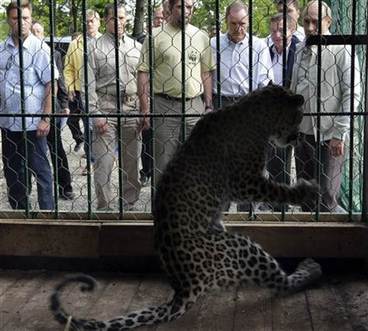 Prime Minister Vladimir Putin stood meters away from a snow leopard in his latest stunt involving a threatened animal but insisted Monday he was just an "ordinary guy" in touch with Russia's problems.

Putin knelt meters away from the snow leopard, kept in a wire-mesh enclosure, as the mythical animal warily eyed the man who has dominated Russia for the last decade in Siberia, state television pictures showed.

The close encounter with the creature -- one of the mascots for the 2014 Sochi Olympics championed by Putin -- helped further burnish his tough-guy image ahead of 2012 presidential elections.

"What a beautiful little cat," Putin, dressed in a Russian hat and a quilted jacket marked with the Russian eagle and the initials V.V. Putin, whispered as he stared at the snow leopard.

There had been controversy over the fate of the snow leopard, a 10-year-old named Mongol, which the Russian branch of the World Wildlife Fund said had been languishing in captivity since its capture on March 14 by scientists in a neighboring area.

The animal was then taken by helicopter to Khakasia in southern Siberia and the WWF on Thursday issued a statement calling for the animal to be urgently returned to the wild.

Mongol was finally released at the weekend just after Putin's visit but the WWF said it would not be giving further comment on the issue for the moment.

In an interview with Russian state television, Putin said that Russia's protection of endangered species like the snow leopard was symbolic of how the country had changed over the last years.

"That one of the symbols of the Olympics is a beast that was wiped out by man in the 1950s shows that Russia is different. Russia cares about nature, about its riches and preserves them for future generations."

Putin has now over the last years met the full range of Russia's rarest big beasts, ranging from bears and tigers in the Far East and a polar bear in the Far North.

But in the interview, Putin said he had lived simply almost all his life "with the exception of the last 10 years".

"I lived like a normal ordinary guy and I will keep this link all my life," he added. "Whenever I take a decision, I think about how this will impact the ordinary citizen," he added.