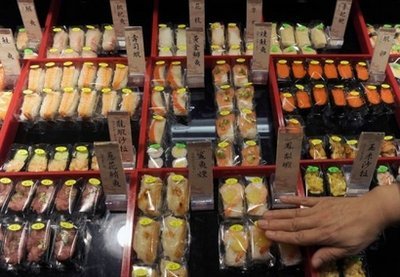 Authorities in Taiwan checking food imports for radiation on Sunday found a shipment of fava beans from southern Japan had been very slightly contaminated, an official said.

The radiation, which was within Taiwan's legal safety limits, was found on 14 kilograms (30.8 pounds) of fava beans from Kagoshima, said Tsai Shu-chen, an official with the Food and Drug Administration.

It is the first report of contaminated food being found outside Japan since the crisis at a nuclear power plant triggered by a devastating earthquake and tsunami nine days ago.

"The beans may have been contaminated when they were airlifted to Tokyo's Narita Airport for a transit shipment to Taiwan," Tsai told Agence France Presse.

Kagoshima, at the southwestern tip of Kyushu island, is more than 1,100 kilometers (700 miles) from the quake epicenter on the east coast of Honshu island.

Tsai called on the public not to panic as the test figures showed that the beans contained just 11 Becquerels (Bq) of iodine and 1.0 Bq of caesium-137 per kilogram -- both well below the national safety levels.

The beans will be destroyed, she said.