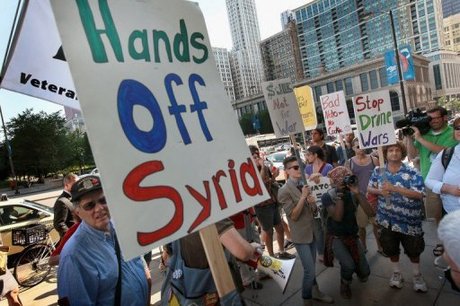 Cyprus, which on July 1 will assume the rotating presidency of the European Union, is ready with its European partners to evacuate third party nationals from Syria, the foreign minister said.

"We are only 100 kilometer from the shores of Syria and Lebanon. Anything that goes wrong there will affect us," Erato Kozakou-Marcoullis said in an interview with Agence France Presse.

"We are now preparing with our partners of the EU for the possible evacuation (from Syria). We have a crisis management center that we have strengthened," the minister said, adding that the Cypriot offer also applied to Syrians with dual nationalities.

Kozakou-Marcoullis said her country was "concerned" about the situation in Syria where a brutal uprising since March 2011 has already killed at least 15,800 people, according to human rights activists.

"We have taken the position from the very beginning that we should try to avoid at all costs a military intervention. For us, military operation in Syria will mean an explosive situation in the region that will not be contained only to Syria."

The Cypriot foreign minister recalled the role Cyprus played in evacuating 65,000 foreign nationals from Lebanon in 2006 during the Lebanon-Israel summer war that year.

She said she also reminded her European counterparts about the geographical location of Cyprus, making it a destination for Syrian refugees and asylum seekers in general.

"If these potential refugees and asylum seekers do not come by boat and sea, they will come through the occupied areas and this is our biggest problem right now with asylum seekers."

Since 1974 Turkey has occupied the northern third of Cyprus which is separated from the Republic of Cyprus by a "green line" monitored by the United Nations.

The breakaway Turkish Republic of Northern Cyprus is recognized only by Ankara.

"Imagine there is a major upheaval in the Middle East, definitely part of them will try to come this way," the minister said.

"It happened with recent uprisings in North Africa, with Italy, with Malta, and this is why one of the inherited priorities of the presidency is the conclusion of this very important European common asylum system," she added.

Kozakou-Marcoullis said northern EU countries should share the cost of receiving refugees driven from their homes by the Arab Spring uprisings with their southern counterparts, who are already bearing the brunt of the migration.

She said Cyprus would not return Syrian refugees in the near term.

"We have taken the decision recently not to send back to Syria any of the asylum seekers or illegal immigrants who are here until the situation is clearer. But there is a limit to what we can do. We are a small country," she said.

The minister also discussed with Agence France Presse the issue of the island's division, saying it will not be influenced by the fact that Cyprus will hold the six-month EU presidency.

"Not only it has never been on the agenda and it is not up to us as the presidency to bring it on the agenda," she said.

But relations with Turkey are regularly discussed at meetings of EU foreign ministers and heads of the governments, she added.

"We have always wanted dialogue with Turkey. The problem is that Turkey has built a block, a concrete block, and not only they do not recognize us but they don't even want to talk to us. So there is a complete deadlock as far as any dialogue with Turkey itself is concerned."

Ankara has decided to freeze contacts with the EU presidency while it is held by Cyprus.