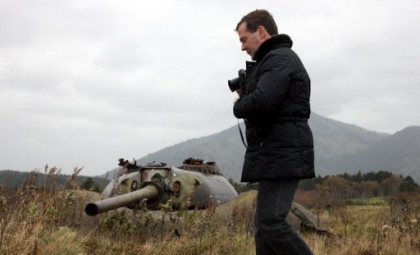 Russian Prime Minister Dmitry Medvedev on Tuesday made a repeat trip to one of the four Pacific Kuril islands claimed by Japan, drawing new protests from Tokyo following years of unrelenting tensions.

Medvedev arrived on the island of Kunashir which lies just north of Japan's Hokkaido Island, pledging to improve the lives of the disputed chain's residents.

"The farthest region of our state cannot and should not be the most deprived region although this was virtually the case some time ago," Medvedev said in televised remarks.

Speaking at a government meeting on Sakhalin Island ahead of his visit to the windswept chain, Medvedev pledged the government would continue to overhaul the Kurils' ramshackle infrastructure, telling his ministers to personally oversee the chain's economic development.

"You have to visit the islands although it is not always easy," he said in remarks released by his office, referring to the chain's often mercurial weather.

"Three times a charm," Medvedev told the residents of the island where he also inspected a fish-processing plant.

Japan swiftly summoned the Russian ambassador in protest at Medvedev's visit and told him of Tokyo's "extreme regret."

"I take it as something that throws cold water on efforts to build a positive atmosphere in Japan-Russia relations," Foreign Minister Koichiro Gemba separately told reporters.

But his Russian counterpart Sergei Lavrov said in Moscow that the visit should be viewed as nothing out of the ordinary.

"The Russian prime minister was on a scheduled visit in his country and was attending to issues of speeding up the social and economic development of this strategically important region," Lavrov said.

Medvedev's first visit to Kunashir in November 2010 -- when he still held the post of president -- opened long-festering wounds in Japan and sparked a furious reaction from Tokyo which condemned the trip as a "unforgiveable outrage".

The two nations have never formally signed a World War II peace treaty because Japan maintains its claim over the islands, which Russia has controlled and tried to develop since Japan's surrender at the end of the war.

Tokyo claims the chain's four southernmost islands, known as the Northern Territories in Japan, and the dispute continues to cast a cloud over Russian-Japanese relations and complicate investment and trade.

The fate of the chain has become the traditional subject of nearly all high-profile talks between Russian and Japanese officials over the past years, with analysts saying those negotiations have reached a dead-end.

Tensions surrounding the Kurils reached new heights after Medvedev's first visit in 2010 that even sparked fears of a conflict.

Russia in February 2011 announced it would boost military defenses on the islands.

However, the dispute slackened somewhat after the earthquake and ensuing nuclear accident that shook Japan in March 2011 and prompted expressions of solidarity in Russia.

Home to some 19,000 people, the islands are rich in gold and silver and lie in waters abundant in marine life.

Shortly after his 2010 visit to the islands, Medvedev proposed creating a free economic zone there, an idea that did not go down well with Tokyo because it would have to acknowledge Moscow's sovereignty over the disputed territory.

Fyodor Lukyanov, editor of Russia in Global Affairs magazine, expressed bewilderment at the purpose of the visit.

"It is unclear why this is needed now that the Japanese government is signaling that it would like to improve ties with Russia," he said on Echo of Moscow radio.

"This looks like window-dressing because little is being done for the Kurils right now."