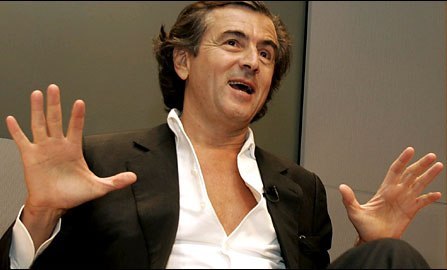 With his open shirt and flowing dark mane, France's most infamous public intellectual has adopted the cause of Libyan freedom, taking an outsized role in French foreign affairs in the process.

Even his detractors -- and he has many -- acknowledge that Bernard-Henri Levy helped engineer France's path breaking recognition of Libya's fledgling rebel authority, a major impetus for the coalition then gathering to back its struggle.

Largely unheralded abroad, BHL, as he is universally known here, is omnipresent in France, the most visible star in France's crowded constellation of big thinkers, glitterati and talking heads.

Even those unfamiliar with his ideas or opinions immediately recognize the trademark white dress-shirt, mostly unbuttoned to expose an ever-tanned chest, and his now-graying, wavy black locks.

The image is as likely to turn up in the pages of a glossy gossip rag -- sometimes flanked by his blond-bombshell wife, actress Arielle Dombasle -- as in the columns of Le Monde or a high-brow televised debate on foreign affairs.

An Algerian-born Jew, he was an early and ardent defender of Bosnian Muslims during the war in Yugoslavia in the early 1990s.

To research a book on Wall Street Journal reporter Daniel Pearl, kidnapped and killed by Al-Qaeda in Pakistan 2002, he spent weeks prowling the byways of Karachi.

Politically on the left, he calls conservative French President Nicolas Sarkozy his friend, even if he has lobbied against many of his policies.

In early March, Levy went to the eastern Libyan town of Benghazi, liberated days earlier by rebel forces after a bloody firestorm of protest.

He encountered members of the just-formed interim national council, and arranged for some of them to sit down with Sarkozy in Paris on March 10.

At the end of that meeting, which Levy attended, France became the first country in the world to recognize the provisional body as legitimate, and to call for targeted airstrikes against forces loyal to Libyan strongman Moamer Kadhafi.

French foreign minister Alain Juppe, who was in Brussels during the Paris tete-a-tete, was apparently caught off-guard by the announcement, which briefly threw European diplomacy into a tizzy.

"Bernard-Henry Levy does not have a lot of fans at the foreign ministry," noted one diplomat dryly, asking not to be identified.

"The problem is not that he is consulted by the president of the republic," said another foreign service veteran, also requesting anonymity.

"What is shocking is the uncoordinated free-for-all, leaving the impression that the last person to say something is right."

But what mattered in the end was the result, another well-placed government official said.

"After all, it kicked off a dynamic... and made a common European position on the interim council possible," he said.

Levy's was quickly dubbed "the new foreign minister" by several media, a title he had already earned during the violent disintegration of Yugoslavia when he arranged a meeting between Bosnia's ex-president Alija Izetbegovic and then-French president Francois Mitterrand.

An irrepressible writing machine, he has nonetheless found time to write more than two dozen books along the way.

He also runs and edits his own magazine, La Regle du Jeu, or the Rules of the Game, and contributes regularly to a dizzying array of newspapers and journals, both mainstream and esoteric.

Levy is not without detractors, some put off by his showmanship and others critical of what they describe as slipshod and slapdash research.

Last year he was caught red-faced for citing and praising the work of a philosopher who, it turned out, was invented as a joke by a journalist.

The writer took it in stride, admitting he had been duped and tipping his hat to the prankster.