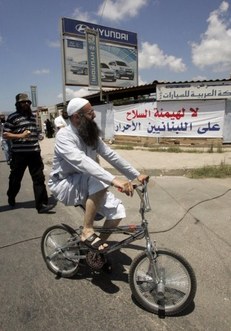 Al-Baba Sweets workers held on Wednesday a sit-in near the protest site of Salafist cleric Sheikh Ahmed al-Asir in the southern city of Sidon to ask the clergyman to open the road for traffic.

Some 250 employees marched towards the area of the sit-in at the northern entrance of Sidon after the protest launched by al-Asir affected their work and reduced the number of their customers.

The protestors raised banners saying “We want to eat … We want to live” and "Release us from captivity."

They asked for a meeting with al-Asir who sent Sheikh Ahmed Hariri to talk to them instead. But they insisted on meeting him personally to inform him that his actions have paralyzed the city.

He has threatened an escalation if the arms issue is not tackled by Lebanese authorities.

This Sheikh title is given to anybody. wtf? Well anyway, el Baba sweets are way overpriced and not any better than smaller scale patisseris.... same goes for el Rifai. They can keep their motakhinat to themselves.

Oh, Al Baba is Sidonian, true. Well, they have the right to protest as well. Anyone has the right to protest peacefully, even Asir. Now that we read that Ahmad Jibril said that him and Hezbollah will defend Syria at all costs... I pledge more than ever my support to this Asir as long as he remains peaceful. Afterall, we were behind Aoun when he was fighting the Syrian foreign entity in 89/90.

Looking at this picture, you'd think it's in Afghanistan or somewhere.

SO ... what's the difference between this sit in that is causing financial problems and the sit in that Aoun and his idiots did in Downtown??? We are a free country, but my freedom stops at the freedom of my fellow countrymen. The moment that my actions start to cause distress to my fellow citizens then I need to recalculate my actions. No one is stoping this guy from doing a highly recommended "peaceful" sit-in but not at the expense of the others, then it is not peaceful anymore. War is not just done by weapons ... financial wars are even worse. And don't give me this BS that you need to break some eggs to do an omlette ... stop breaking lebanon

Bro ,that comments are so racists :)

Al Baba can go and get dirty with Al Mama because al-Asir proved more effective that cheikh al-Imbecile Hariri.

Um no, it is not 'all good' as long as it's peaceful. This loser sheikh and his followers are not only obstructing citizens from accessing PUBLIC roads, but also paralyzing the business of private establishments. I'm sure that if the posters above me had their own business paralyzed by this LAME protest (organizeed by some loser 'sheikh'), they too would want it to end!!!

Chuck Norris is a nazi. So are Bachar, Nasrallah or Natanyahu.