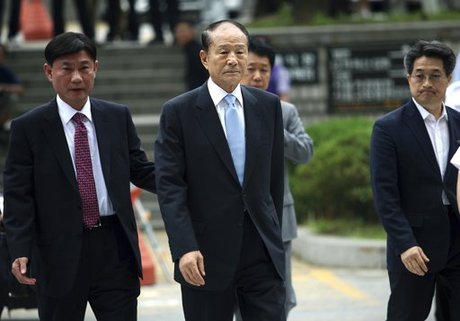 The elder brother of South Korean President Lee Myung-Bak was arrested and detained early Wednesday pending a corruption trial, in a setback for the conservative ruling party during an election year.

The 76-year-old was taken to a detention center immediately after the warrant was issued. Angry bank depositors had hurled eggs at him when he arrived at court Tuesday for questioning.

Prosecutors allege he took 600 million won ($525,000) from chairmen of two troubled savings banks -- Solomon Savings Bank and Mirae Savings Bank -- between 2007 and 2011 in return for helping them avoid audits and punishment.

"Lee's crimes have been ascertained and there is a reasonable concern that the suspect might attempt to destroy evidence, considering his status and political influence," Judge Park Byoung-Sam said, quoted by Yonhap news agency.

Regulators in May suspended four savings banks including Solomon and Mirae, leaving many customers unable to withdraw money.

The scandal is the latest in a series of corruption cases involving people close to the president, whose five-year term ends in February 2013. An election for his successor will be held on December 19.

Chung Doo-Un, a ruling party lawmaker and a close confidant of the president during the 2007 presidential campaign, was also questioned by prosecutors last week over the saving banks affair.

On Wednesday a court request for Chung's arrest was rejected by a vote of 74 to 156 in parliament. South Korean courts need approval from parliament to arrest a lawmaker when it is in session.

In May 2009 Roh committed suicide by throwing himself off a cliff after he was questioned as a suspect in a multi-million dollar corruption case.

Roh apologized for his family's involvement but did not admit personal wrongdoing.

Lee Sang-Deuk was credited as the main contributor to his brother's election, playing the role of a troubleshooter behind the scenes. But critics said he tried to wield too much influence over state affairs.