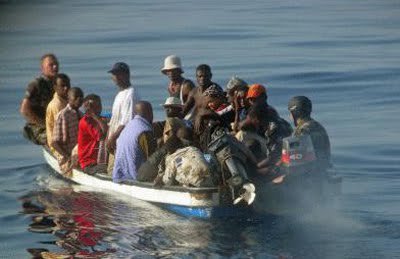 Fifty-four migrants trying to reach Italy died of thirst when their inflatable boat ruptured in the Mediterranean, according to testimony from the sole survivor, Abbes Settou, the U.N. refugee agency said on Wednesday.

Settou, who drank sea water to survive, was spotted clinging to a jerry can and the remains of the stricken boat off the Tunisian coast on Monday night by fishermen who alerted the coast guard, the UNHCR said.

The man, who is being treated in a Tunisian hospital, said there was no fresh water on board and people started to perish within days, including three members of his family.

He said 55 people boarded the boat in the Libyan capital Tripoli in late June, and that more than half were from Eritrea, including himself.

They were unable to call for help because the boat's satellite phone was broken, according to Father Mussie Zerai, an Eritrean priest who spoke to the survivor by telephone on Wednesday.

"He said they were at sea for 15 days in total," the priest told AFP. "They had apparently reached Italian waters but they weren't able to call for help because the satellite phone was broken, so the wind pushed them back out into open sea.

"During those 15 days the people on board slowly began dying of hunger and thirst. They were lost, they could not orient themselves.

"He is recovering. In a few days he said he would be moving to a refugee camp."

In his account of the ordeal to the U.N. High Commissioner for Refugees (UNHCR), the survivor said the boat had punctured and air started to leak out.

Settou later spoke to Agence France Presse, saying he survived "by the grace of God."

Speaking of his fellow passengers, which also included Somalis, he said "they died of hunger, of thirst, of exhaustion. We threw their bodies overboard."

"This is a tragedy," said T. Alexander Aleinikoff, Deputy High Commissioner for Refugees. "I call upon all vessels at sea to be on heightened alert for migrants and refugees needing rescue in the Mediterranean."

The U.N. agency estimates that 170 people have been declared dead or lost at sea attempting to make the journey from Libya to Europe so far this year.

Greece and Italy are the two main entry points for undocumented immigrants into the European Union. Italy in particular has seen a spike in arrivals over the past year following the Arab Spring revolts in North Africa.

Malta is also a frequent landing point but is increasingly being spurned by immigrants worried about the relatively lengthy registration process for new arrivals, the UNHCR said.

"With that knowledge, people are going on to Italy," said Wilkes.

"We didn't see this at all last year, that boats are finding their way to Malta and then refusing to go in."

So far in 2012, more than 1,300 people have made the sea journey to Italy from Libya, the UNHCR said. The busiest period for crossings is from May to September, when the Mediterranean Sea is at its calmest, the agency added.