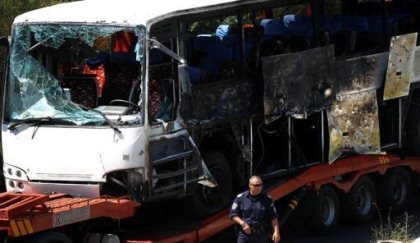 Bulgarian police along with the CIA, FBI and Interpol are struggling to identify a suicide bomber who killed six people, including five Israelis, as the United States said the attack bore the "hallmarks" of Hizbullah.

Investigators have released CCTV footage of the person they believe carried out Wednesday's attack at the airport of the Black Sea town of Burgas on a bus carrying Israeli holidaymakers, which also claimed the life of the Bulgarian driver.

After two days of investigations, Interior Minister Tsvetan Tsvetanov was able only to confirm Friday that the bomber was not a Bulgarian citizen and had been in the country "not less than four days."

Fingerprints and DNA samples from the suspected bomber's body were being used in the effort to learn his identity, he added.

The minister also made public Friday evening some scanty details on the explosive used in the first attack of its kind in Bulgaria.

"We are speaking about trotile, about three kilograms (seven pounds). Analyses are continuing," he told state BNT television.

Trotile is made from Trinitrotoluene or TNT -- a common material in military bombs and also frequently used in attacks by militant groups.

Bulgaria's Pressa newspaper and the bTV channel said the bomber could have had an accomplice who detonated the explosives by cellphone.

A man and his wife who ran a car rental service said they recognized the suspect who came to hire a vehicle. They said he had a wad of 500-euro bills and refused to rent him a car as his U.S. driving license appeared to be a fake.

Bourgas prosecutor Kalina Tchapkanova quoted witnesses as saying the man "spoke English with a slight accent" and appeared to be Arab.

The car rental service owner's wife Afrodita Petrova said she was sure he was of Arab origin and had a shaved head.

The only document found on the bomber was a fake Michigan driving license in the name of Jacque Felipe Martin with an address in Baton Rouge in Louisiana.

Michigan is known to issue licenses only to state residents.

Israel and Bulgaria meanwhile held emotional funerals for the victims -- Israelis Kochava Shriki, 44, who was pregnant, Yitzhik Kolengi, Amir Menashe, Elior Priess and Maor Harush, all in their 20s, and the Bulgarian driver of the bus Mustafa Kyosov, 36.

More than 30 people were also injured in the blast, three of them seriously, all of whom have since been repatriated, as have around 60 others who escaped injury. Some opted to continue their holiday in the Black Sea resorts popular with Israelis.

U.S. President Barack Obama pledged solidarity with Bulgaria over the "barbaric attack," echoing indignation from around the world.

In a telephone call with Bulgarian Prime Minister Boyko Borisov, Obama "offered his support for the ongoing investigation and for the Bulgarian people in this challenging time," the White House said in a statement.

On Wednesday, Obama had phoned Israeli Prime Minister Benjamin Netanyahu to offer his condolences and support.

Israel has blamed Iran and Tehran's "terrorist proxy" Hizbullah, saying it fitted a pattern of other recent attacks or attempted attacks on Israelis including in Thailand, India, Georgia, Kenya and Cyprus.

The Islamic Republic, already under pressure over growing international tensions over its nuclear program, rejected Israel's accusations as "ridiculous."

"The attack does bear some of the hallmarks of Hizbullah, but we're not in a position to make any final determination on who was responsible," Pentagon press secretary George Little told reporters on Friday.

Tsvetanov said the man, who was shown wandering around the airport, looked around 36.

Interpol has sent an "incident response team" to Bulgaria including two "terrorism" experts from Switzerland and France and a U.S. explosives specialist. European police agency Europol was also assisting.

The explosion ripped through the bus as around 50 Israeli tourists arriving from Tel Aviv were loading their bags before travelling to nearby holiday and gambling resort Sunny Beach.

The bomber struck on the 18th anniversary of an attack on a Jewish community center in Argentina that killed 85 people.