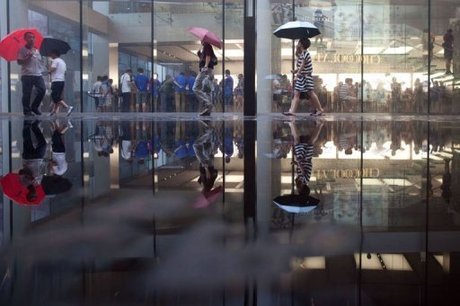 The heaviest rain to hit Beijing in 61 years left at least 10 people dead over the weekend, while more downpours were forecast for northeast and southwest China, state press said Sunday.

A policeman who was electrocuted by a fallen power line during a rescue operation was among the fatalities, while others were killed in traffic accidents and roof collapses, it said.

Up to 46 centimeters of rain fell in Beijing's Fangshan district, the most rain to hit the city in a 14-hour period since records began in 1951, the report said.

Numerous roads in the capital were submerged beneath up to one meter of water, while 475 flights were cancelled.

On Sunday, clean-up crews were out repairing damage from the downpour under largely sunny skies.

But more torrential rain was forecast in China's northeast and southwest, after at least 10 other people were killed since Friday.

In Shanxi province, in the north, four people died and one remained missing after their pick-up truck was swept into a river while they attempted to cross a bridge, Xinhua said.