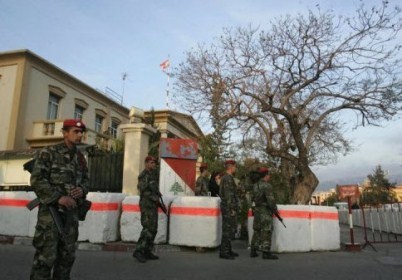 The army intelligence detained on Saturday a Lebanese citizen and a Syrian national who were transferring arms in Brital, the National News Agency reported.

According to NNA, Lebanese Ahmed D. is from the eastern border town of al-Tufail and the Syrian national from al-Kahloun family.

The report said that the two were transporting weapons, silencers, ammunition and sniper rifles from the town of Ain al-Jawze in Brital.

Syria and Lebanon on Wednesday traded accusations about cross-border violations, each saying the other had breached their shared frontier.

The Lebanese-Syrian border area is used by smugglers and by Syrians fleeing the violence in their country to Lebanon.

Lebanon and Syria share a 330-kilometer border but have yet to agree on official demarcation.

How much weight do you have to lose to go a clothing size down?

i meant come on

stop the flow of arms both ways

Pity the nation with one sided biased army command. HA are sending hundreds of militant thugs into syria and the army didn't move a finger. Taking sides will eventually backfire.

It's a real problem, so many Syrian Zionist Army soldiers are getting fired back at and killed. Not exactly what they are trained for. Shooting at unarmed civilians is what they know best.

Excuse me but which Syrian Zionist Army are you refering to?

How can they intercept a couple of individuals (easy targets) and let in trucks loaded with rockets and missils?

i am with you why is it HA allowed to fight for assad and send units into syria but we cant let syrians and other nationals into syria to fight the assad regime....oh ya syria still controls lebanon i forgot

This is not an approved arms delivery by Hizballah hence is illegal...lol

Anybody has info on HA fighters in syria? Are they fighting on the ground? how many people?