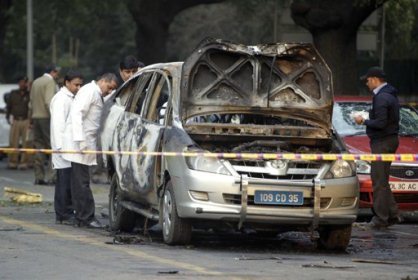 Indian police have concluded that members of Iran's Revolutionary Guards, a branch of the Iranian military, carried out an attack on an Israeli diplomat in New Delhi in February, a report said on Monday.

The Times of India, citing the police investigation, said that five suspects were believed to have worked with a local Indian journalist to plan the attack which saw a hitman on a motorbike attach a magnetic bomb to an embassy car.

Interpol had already issued international arrest warrants for four of the suspects named in the report in March, but this is the first time it has been alleged they were members of the Revolutionary Guards.

"Details about the suspects have been shared with Iran," the newspaper said.

It named Houshang Afshar Irani, who lists his profession as a builder, as the mastermind of the attack and said he was also behind separate plots to kill Israelis in Thailand and Georgia at around the same time.

The main plotters were believed by police to have entered the country on tourist visas and left after the assassination attempt.

A 42-year-old Israeli diplomat, the wife of the defense attache at the embassy, was badly wounded in the attack that took place near the prime minister's residence in the center of the Indian capital.

Analysts speculated that Tehran was retaliating for a series of attacks on Iranian nuclear scientists which have been blamed on the Israeli secret service, Mossad.