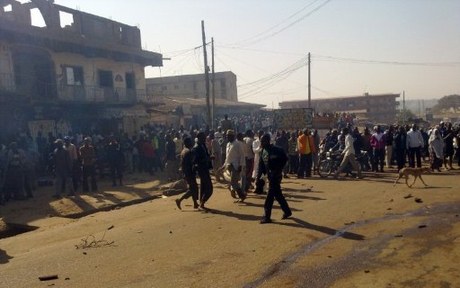 Suicide blasts at two police stations in northwestern Nigeria's city of Sokoto on Monday left one officer and a civilian dead, while injuring 30 others, a Red Cross official said.

"A policeman and woman were killed in the bombings. Thirty people were injured," said the official who asked for anonymity and confirmed that both blasts were suicide bombings. The two bombers also died, the official added.

Nigeria's Boko Haram Islamists, responsible for scores of deadly bombings in recent months, are suspected of having hideouts in Sokoto, but the group has rarely attacked within the city.

A senior police officer, who requested anonymity, said a suicide bomber approached the Yan Marina police station in the center of the city in a car packed with explosives.

The bomber was denied entry at the security gate, where the vehicle blew up, according to the officer.

A resident near the station, Usman Bube, said the area was "engulfed in flames."

"There was a huge explosion about an hour ago at the police station that was followed by thick smoke," Bube told Agence France Presse. "It is so chaotic now, with people running to safety."

"We had a loud explosion around the police station. The impact of the explosion shook houses in the area. We all moved indoors," he said.

Boko Haram has repeatedly targeted the police across northern Nigeria, where most of their attacks have been carried out.

The radical Islamist group has long stated its loathing for Nigeria's traditional Muslim leaders, saying they have betrayed the faith by subjecting themselves to the country's secular government.

Boko Haram has said it wants to create an Islamic state in Nigeria's mainly Muslim north, where, in the pre-colonial era, there was a powerful Islamic empire headquartered in Sokoto.

Most residents in Nigeria's southern half are Christians, and some analysts have warned that Boko Haram is trying to spark a religious war in Africa's most populous country.

In May, gunmen accused of being Boko Haram members shot at a building near Sokoto's Yan Marina police station, killing one officer and a civilian, but police insisted the target was a residence.

A Briton and an Italian were killed in the city in March during a failed attempt to free them from their kidnappers. They were believed to have been shot by their captors before they could be rescued.

Boko Haram, which regularly claims attacks in statements sent to journalists, denied all involvement with the kidnapping and local leaders also insisted the radical group was not responsible for killing the two Europeans.

The group has claimed the deaths of more than 1,000 people since the middle of 2009.