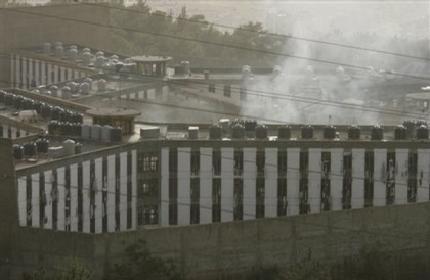 Rifi reassured "the Lebanese and the prisoners that the mutiny ended permanently and peacefully."

"Together with the prison's administration, we sincerely conveyed the prisoners' demands to the judicial and political authorities," the ISF chief added.

He also announced that the Lebanese State "has approved LBP 19 billion for creating two prisons in the North and the South and the projects have been already assigned to contractors."

But "this plan requires a certain timeframe," he noted.

Voice of Lebanon Radio (93.3) reported that inmates had freed a guard who had been taken hostage since Saturday night after negotiations with the security forces.

Earlier, Rifi revealed that no injuries were reported during Saturday's protest at Roumieh prison.

"Should the situation escalate into a riot, then we will intervene, but we usually allow 24 hours for such affairs to be settled," he added.

Earlier that day, several inmates clashed with wardens after a protest against "transfer and routine inspection procedures" inside Roumieh prison turned violent.

A security source told Agence France Presse that a prisoner protested against the procedures at noon when he clashed with one of the guards.

The squabble turned into rioting when the inmate threatened to harm himself if authorities do not meet his demands, the source said without saying what the prisoner was asking for.

Later other prisoners joined him and broke windows and burned mattresses inside their cells, the source told AFP.

Media reports said the situation was later brought under control.

The same prison has been the scene of several mutinies. Two years ago, seven wardens were held hostage before a peaceful resolution was negotiated.

Meanwhile, the Interior Ministry condemned the violence at Roumieh prison, noting that calling for the fulfillment of demands should not take a violent turn.

It revealed that for two years, it has been working on improving the conditions in the prison after years of "chronic neglect."

It demanded the government and concerned ministries to also assume their responsibilities in this affair.

A Roumieh inmate told al-Jadeed television on Sunday that no one had been taken hostage in the prison, warning that the violence might spread to other buildings in the prison if their demands were not met.

He also denied that the protest was sparked over a demand to change the prison warden.

"There are various reasons behind the break out of the unrest, including the poor living conditions and the overcrowding," he said.

He added that the ministry will have jurisdiction over prison affairs in 2012.

Security forces had informed Roumieh inmates of the decisions of a meeting between caretaker Interior Minister Ziad Baroud and Prosecutor General Saeed Mirza on tackling the situation in the prison.

Baroud and Mirza met at midnight Saturday in order to address the inmates' demands.