Lebanon Resorts to U.N. for Help as Lebanese Flee to Dakar from Ivory Coast Violence 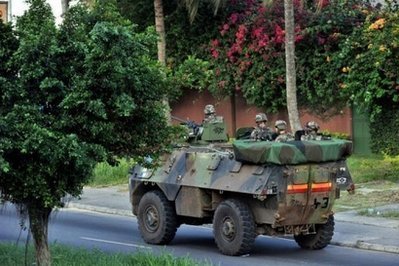 Lebanon’s ambassador to the U.N. Nawaf Salam will ask Secretary-General Ban Ki-moon to deploy more U.N. troops in cities in the Ivory Coast where most Lebanese are concentrated and help them overcome the difficult conditions in the violence-torn country.

Salam told Speaker Nabih Berri during a telephone conversation that he would meet with Ban on Monday.

The expected meeting comes as Caretaker Prime Minister Saad Hariri held a phone conversation with the U.N. chief and discussed with him measures that peacekeepers could take to protect the Lebanese in Abidjan and evacuate those wishing to leave.

An Nahar daily said that President Michel Suleiman also made more contacts with several countries, mainly France. Caretaker Foreign Minister Ali al-Shami briefed him on Monday on the efforts to protect the Lebanese community in the African country.

A first group of foreigners fleeing chaos in Ivory Coast was evacuated Sunday as the French army took over the airport in Abidjan.

The French military said 167 foreigners, including French and Lebanese nationals, left Abidjan for the Senegalese capital Dakar on a special flight.

Internationally recognized president Alassane Ouattara's camp announced the time was ripe for a rapid offensive in the economic capital, where it has effectively cornered strongman Laurent Gbagbo, leading to four days of fierce fighting.

LBC TV network said Monday that four Lebanese were injured in Abidjan by stray bullets, one of them seriously after bleeding for six hours, raising the number of wounded to seven.

The relatives of Lebanese expatriates stranded in Ivory Coast staged a sit-in Sunday outside the foreign ministry in Beirut, demanding a solution to the humanitarian crisis.

Al-Shami promised the protesters to find a quick solution.