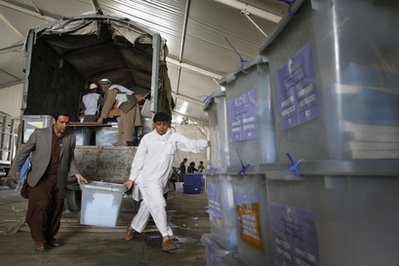 The number of cancelled votes represents more than 23 percent of the number of ballots cast in the September 18 election.

Afghans voted in the country's second post-Taliban parliamentary election since the Islamist regime was overthrown in a US-led invasion in late 2001.

More than 2,500 candidates stood for 249 seats in the lower house of parliament, the Wolesi Jirga.

Final results are not expected until the end of this month but could be delayed as the Electoral Complaints Commission completes investigations of thousands of complaints, including against the "suspicious" candidates.

The election followed last year's presidential vote which was marred by widespread fraud and the invalidation of around 1.5 million votes -- also around one quarter of the total -- most in favor of the incumbent.

A Western official, speaking on condition of anonymity, said the parliamentary poll represented "politics as usual, just as corrupt and just as violent as last year".

Taliban-led insurgents, waging war on Karzai's Western-backed government, acted on threats to try and disrupt the election, which it said was a tool of the US-led "occupation" forces.

The United States and NATO have more than 150,000 troops in the country fighting the insurgency, and are expected to start to drawdown combat troops from the middle of next year.

To that end, the United States is bankrolling a massive training program for the Afghan army and police so they can take on responsibility for the country's security by 2014.

The elections are part of the process of developing the country's nascent political system, which is rife with corruption and cronyism, and generally seen to help enrich a favored few.

"These elections will do little to alter Afghanistan's system of patronage politics, and will certainly not alter the balance of power," the official said.

Afghanistan lacks political parties and parliamentary blocs form according to vested interests, such as ethnic or geographical alliances.(AFP)