Miqati: Warrants to Be Issued against Violators of Security, Airport Road Won’t Be Blocked Again 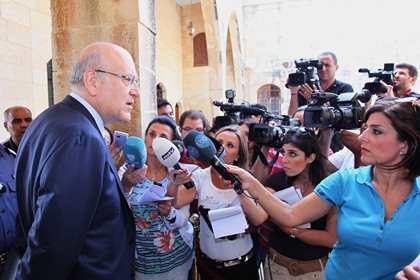 Prime Minister Najib Miqati stressed on Thursday the importance of national unity during the current tense security situation in Lebanon.

He told reporters after the national dialogue session: “Arrest warrants will be issued against those who violated security in Lebanon and the airport road will not be blocked again.”

“Yesterday’s developments will not be repeated again,” he said in reference to the blocking of the airport road and the kidnapping of the Syrian nationals in Lebanon by the Meqdad family military wing.

“Are yesterday’s developments a product of the government’s actions? Or are they a product of years of build up?” he wondered in response to criticism that the government had not assumed its responsibilities in maintaining security.

“Is it possible that the government is the one that is igniting the situation?” Miqati wondered.

“The case of the kidnapped Lebanese is being monitored. Issues have taken an abnormal course,” he noted.

“The situation is difficult and requires an extraordinary government,” stressed the premier.

“The army is performing its duties to the fullest as demonstrated by the reopening of roads shortly after being blocked,” he remarked.

“We have to remain positive,” he stressed.

On the abduction of Syrians and a Turkish national by the Meqdad clan, Miqati said: “I am in contact with the president, various security agencies, and concerned ministers over this issue.”

“We are hesitant in resorting to force because we fear for the lives of the captives,” explained the prime minister.

Al-Meqdad clan kidnapped on Wednesday over 20 Syrian nationals, who allegedly belong to the Free Syrian Army, in tit-for-tat kidnappings after the FSA detained Hassan Salim al-Meqdad earlier this week.

The family’s military wing warned that they can reach Aley, Tripoli and Iqlim al-Kharroub, saying that they have a bank of targets in Lebanon and capable of reaching regional targets.

On Tuesday, Hizbullah denied a video aired by al-Arabiya news channel claiming that the FSA detained a member of Hizbullah identified as Hassan Salim al-Meqdad.

The family of 39-year-old Hassan also ruled out that he is a member of the party, revealing that he works at Jammal Trust Bank and headed to Syria a year and a half ago to resolve some financial problems.

Several family members of 11 Lebanese pilgrims kidnapped in Syria closed the airport road over conflicting reports that the men were killed in a Syrian army raid on the town of Aazaz in the province of Aleppo.

traitor mikati
the army is doing its job: is the job of the army to just reopen the airport road?
the role of the army is to disarm all these thugs and free the abducted people.
but then again, you just execute the orders of your syro/iranian masters.... sad.

I'm sorry, but who gave you the duty of defining the job of the army?

It is people with thick heads and a twisted sense of reality that make the Lebanese look bad.

The man is doing his job, and if he does anything else during this tense period there will be more problems than there are now.

you came back from KSA without even an audience with the king: does it tell you something?

"We are hesitant in resorting to force because we fear for the lives of the captives,”
No you are not! You just can't go against the Meqdad (HB) because they are your political allies!

@thepatriot, they're not his political allies but his masters along with ASSad, and by the way Mr. PM, warrants will only be issued if your masters give the green light and in this case they're not gonna incriminate themselves so shut up already no one is listening.

Cover the airport road all the way until it becomes a freeway tunnel with no pedestrians.

Hey Najeep dude, you do remember what happened the last time the Lebanese government tried to limit the Resistance's God given right to violate security in Lebanon especially the airport road don't you.

Al mikdad and Hizbollah are one and the same .

what's wrong with this statement "The family’s military wing"? Families have military wings now? And pray tell what THIS wing is resisting and liberating? Lebanon has once more degenerated into a cesspool. The Party of Satan is so happy now...chaos is what it wants so no one can discuss or question the presence of an Iranian army in Lebanon claiming to be resistance. Oh the webs they weave!!!!

About time---it only took a couple of dozen times for him to even say anything. Now let's see if anything comes of it.

I recommend bulldozers to keep the roads open.

I'm not condoning any kidnapping no matter the circumstance, but doesn't this statement seem a little fishy

"The family of 39-year-old Hassan also ruled out that he is a member of the party, revealing that he works at Jammal Trust Bank and headed to Syria a year and a half ago to resolve some financial problems"