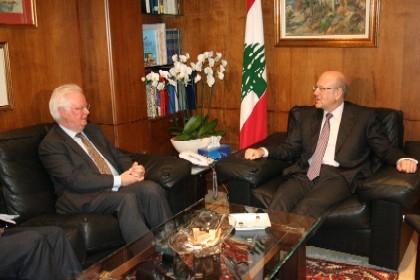 U.N. Special Coordinator for Lebanon Michael Williams held talks on Thursday with Maronite Patriarch Beshara al-Rahi, during which he welcomed his calls for openness and dialogue with other religions and other countries.

He said after the meeting: “I told him that the slogan of ‘Partnership and Love’ he has chosen was very timely and essential in this period of turbulence in the Arab region.”

“The United Nations supports all efforts aimed at bringing people closer together, and we have repeatedly stressed the importance of dialogue as the best means of promoting more understanding and tolerance,” he continued.

The meeting also addressed the situation of the Christians in Lebanon and in the Arab region and the important role they have played in this region for centuries.

“Finally, I asked His Eminence today for his prayers for the safety and immediate release of the seven Estonian nationals that were abducted two weeks ago,” Williams continued.

“I have appealed for their immediate release, and I stress that no purpose is served by their continued detention. We all hope this matter will be resolved very soon,” he concluded.

Williams held talks on Wednesday with Prime Minister-designate Najib Miqati on the situation in the Arab world and Lebanon, including the kidnapping of the seven Estonians.

He stated: “I welcome the diligent efforts of Lebanon’s security forces and the Lebanese army to uncover their whereabouts and secure their release.”

Addressing the government formation process in Lebanon, the U.N. official said: “I commended Miqati for his determination to form a cabinet that would meet the aspirations of all Lebanese.”

“We look forward to the early formation of a government, which will help address the priorities of the Lebanese people,” he stressed.

“The United Nations and U.N. Secretary General Ban Ki-moon were closely monitoring the situation in countries throughout the Arab world,” he added.

“There has long been a crisis of governance in the region, the effects of which we are witnessing now. We all hope that leaders in these countries listen to the expressions of legitimate aspirations by their people,” he stressed.