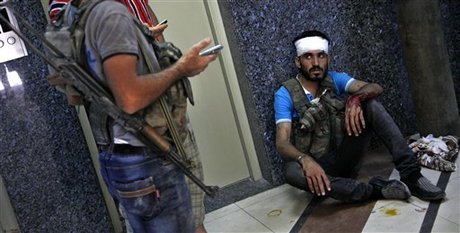 British and German spies are involved in covert operations to help Syrian rebels in their increasingly bloody fight to topple the regime of President Bashar Assad, press reports said Sunday.

German and British spies were passing on information about Syrian troop movements to the rebels who took up arms against Assad's regime over a year ago in the face of its brutal crackdown on protests, they said.

"We can be proud of the significant contribution we are making to the fall of the Assad regime," an official from Germany's BND foreign intelligence service told Bild am Sonntag.

The paper said German spies were stationed off the Syrian coast and also active at a NATO base in Turkey, whose government is staunchly opposed to the Assad regime and is sheltering Free Syrian Army rebels.

Berlin insists military intervention is not the way to solve the conflict but Defense Minister Thomas de Maiziere said earlier this month that Germany must help in other ways, providing humanitarian aid and logistical support.

It said the most valuable intelligence has been about the movements of troops towards the flashpoint commercial hub of Aleppo, which is now partly controlled by rebels and is the scene of some of the fiercest fighting.

The regime's far superior military might has failed to suppress the poorly armed rebels whose determination to bring Assad down has only grown with the passing of time.

wooooow you just realized that the west was helping the FSA in covert and overt way, trying to topple the Assad regime. check the Syrian jails for all those French, turkish, and british soldiers.
Good Morning