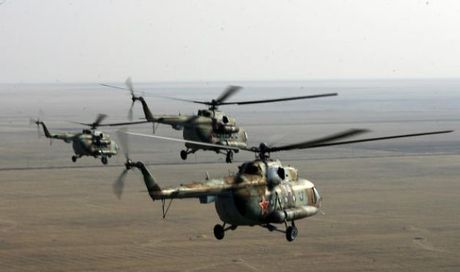 Air force spokesman Wing Commander Gerard Galway said the two Mi-17 helicopters were "flying in close formation" over a firing range in the western state of Gujarat when they crashed.

"It is likely it was a mid-air collision," Galway told Agence France Presse, confirming that all nine on board the two aircraft had died.

Galway said an inquiry would establish exactly how the accident occurred.

An air official who did not want to be named said the two helicopters were practicing firing over the range near a military airbase in Jamnagar district when the accident happened.

Jamnagar police chief Harikrishna Patil told AFP by telephone from the accident site that the aircraft appeared to have collided before they came down in cotton fields near a village.

"One of the helicopters also caught fire after hitting a high-tension power cable," he said.

India plans to buy up to 400 helicopters, worth hundreds of millions of dollars, to replace its ageing fleet of Russian- and British-supplied aircraft.