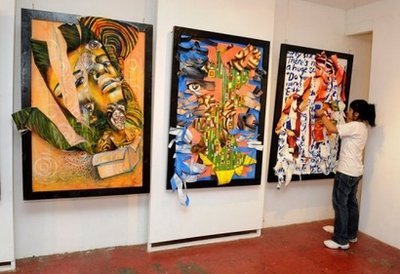 Tucked in the mist-covered slopes of Mount Makiling, the Philippines' premier public school for the arts is busy molding the country's future cultural ambassadors.

The gifted scholars embark on a rigorous 12-hour daily routine of academic study, music, dance, theatre, visual arts and creative writing at the state-funded Philippine High School for the Arts.

Surrounded by green woods, the atmosphere at the 13-hectare (32-acre) campus is far removed from the Philippines' chaotic urban sprawl.

A picturesque view of the Laguna de Bay lake below provides a calming scene from the cottages inside the campus, about a two-hour drive south of Manila.

"Our dream and goal is to ennoble the Filipino spirit -- that we are good, that we can excel," the school's executive director and Jesuit priest, Carmelo Caluag, told Agence France Presse.

"We are doing this because art and culture are the windows to the soul of the people, they nurture our spirit."

The school began as a more informal haven for young artists in the 1970s.

It was established by the then first lady Imelda Marcos, who lavished much time and money on the arts during her dictator husband's 20-year rule of the country.

Marcos chose the slopes of 1,090-meter (3,600-foot) Mount Makiling as the site, which was named after the enchanting daughter of two deities who protected nature in local folklore.

It was however only in 1989 that then-president Corazon Aquino signed an executive order establishing it as an official public high school for gifted children, a third-world replica of New York's famous Juilliard.

The students at Makiling are now carefully chosen from thousands of applicants who audition for just over 30 slots a year.

The rewards of acceptance can be huge -- past graduates have become famous musicians or artists or gone on to study abroad.

The 145 students get free board and lodging, and the school appoints a special tutor or master for whatever discipline each of them wants to pursue.

So deep is the government's commitment to the school that despite the nation's coffers being nearly bare, it spends an average of 300,000 pesos (6,976 dollars) a year on each student.

This is about 30 times the amount allocated for students at a regular public school.

While the Makiling students are afforded every chance at success, the school's only hope is that they will pursue a career in the arts to preserve and champion the Philippines' rich culture.

"There is no real contract between us and the scholars for them to repay us in kind," said Caluag, 52.

Teachers also tried to prepare the students for the real world, he said, noting that a career in the arts could be financially frustrating at times -- one reason why some opted to go in another direction once reaching university.

"There is no clear distinct career after this experience," Caluag said, but he stressed those who were really passionate about their chosen craft often enjoyed success after graduating.

Among the stand-outs is Candice Adea, now the principal dancer of Ballet Philippines.

Adea, 24, and her partner last year won the silver medal at the USA Ballet International Competition, considered the Olympics of dance, and she credits her success to the work ethic she developed at the mountain school.

Adea said she was sent abroad twice to compete when she was a student there, valuable training that helped hone her technique and realize that dance was what she wanted to pursue in life.

"They gave me the opportunity to see the real world of ballet. From that opportunity, I realized what I wanted to do with my career," Adea told AFP during breaks in practice at Manila's Cultural Center of the Philippines.

"These experiences fed our minds. We got to go to different places and perform. Experiences that you would never have in other schools."

Fifteen-year-old Suzy Rellon is just embarking on what she hopes will be a similar journey.

Rellon left behind her parents and three siblings in the southern Philippines, which has been plagued by a deadly insurgency for decades, to begin her dream of one day traveling the world as a performing artist.

"Dance is my life. There is nothing else for me," said Rellon, adding that she hoped to one day show the world the beauty of ethnic folk dance fused with contemporary music.

Meanwhile, Anne Mimille Guzman, who graduated this year, has launched her first children's book in Manila and proceeds of the sales will go to funding an arts workshop for public school children.

"I believe the mastery of the written word is a gift I can share to everyone," the 17-year-old said. "We spent four years of our lives here. It is time to give back."