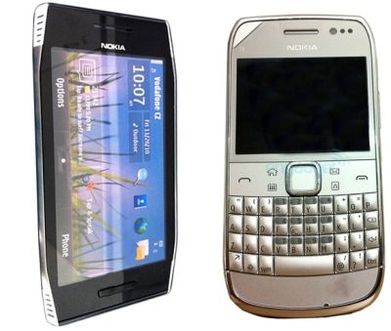 Nokia Corp. on Tuesday launched its first smartphones to run on the updated Symbian software with new icons, enhancements and a faster browser.

The Nokia E6, with a standard QWERTY keypad and high resolution touch display, is aimed at corporate customers, while the Nokia X7 is an entertainment-focused handset with a 4-inch (10-centimeter) display made for games.

The world's largest cellphone maker did not price the handsets.

Markets seemed unimpressed by the announcement, which comes as Nokia continues to struggle against stiff competition, especially from Apple Inc. and Research in Motion Ltd.

More than 200 million phones, with 150 million more expected on the market, use Symbian technology, seen by some developers as clumsy and dated. At the end of last year, it was surpassed by Android as the world's No. 1 smart phone software.

Nokia said the new, faster Symbian software, known as Symbian Anna, will be available for previously released top models, including the N8, E7, C7 and C6-01 devices "in coming months."

In February, Nokia and Microsoft surprised the industry by announcing they were joining forces to challenge major rivals. Nokia said it will use Microsoft Corp.'s Windows Phone software as the main platform for its smartphones but will continue to develop and use the new Symbian software.

But they have a tough battle ahead.

The iPhone has set the standard for today's smartphones and Research In Motion Ltd.'s BlackBerrys have become the favorite of the corporate set. More recently, Google Inc.'s Android software has emerged as the choice for phone makers that want to challenge the iPhone.

A key challenge will be to produce quality devices with a hip factor that helps position Windows Phone as an attractive alternative in a market where image plays a central role.

Windows Phone 7, launched last year, has a lot of catching up to do both in the number of users and "apps" available for the phones.

Nokia, which claims 1.3 billion daily users of its devices, said it hopes the partnership with Microsoft will lead to capturing the next billion users to join the Internet in developing growth markets.

Last year, the Finnish firm retained its No.1 spot as the world's top mobile phone maker — a position it has held since 1998, selling 432 million devices — more than its three closest rivals combined. But market share has continued on a downward spiral — from a high of 41 percent in 2008 to 31 percent in the last quarter of 2010.

Also, its share in smartphones has plunged — to 30 percent at the end of 2010 from 40 percent a year earlier. And, at the end of last year Nokia and the Symbian platform was surpassed by Android as the world's No. 1 smartphone software, according to Canalys research firm.