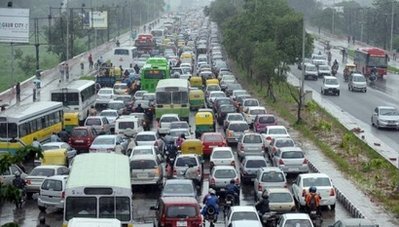 IBM is testing smartphone software designed to predict traffic jams and warn motorists before they even take to the roads.

IBM said late Tuesday that its employees in the San Francisco and Silicon Valley areas of Northern California have been testing technology that "will ultimately help drivers around the world" avoid fouled traffic.

Those involved in the pilot project agree to have location-sensing capabilities in their smartphones automatically track where they drive and when, according to IBM Smarter Traveler program manager John Day.

The information is fed through the Internet to computers that identify patterns such as commutes to and from work.

For example, congestion at a certain off-ramp or bridge entrance may consistently lead to traffic backing up in another area.

The results are combined to form personalized predictions of when a motorist is apt to run into highway headaches.

"We wanted to take advantage of analytic tools to provide predictive capabilities; to get correlations with minor slowdowns and major ones that happen after that," Day told Agence France Presse.

"So you can run a query at any point for a journey and predict 35 or 40 minutes in advance what it will look like, then couple that with a personal approach for the individual traveler."

IBM researchers worked with California state highway authorities and a Mobile Millennium Team at the University of Berkeley, California, on the project.

The smartphone application lets people receive customized alerts warning of probable traffic trouble before they set out on commutes or other routine drives.

The service is powered by a "first-of-its-kind learning and predictive analytics tool" called the Traffic Prediction Tool (TPT) developed by IBM Research.

"The idea is to learn a traveler's habits, then run it on the predictive model to see what traffic they can expect," Day said.

"The objective was to make it much more personal and provide it to them just before they were about to leave."

IBM researchers envision integrating real-time data from bus or train systems into the equation so the service could advise people when it would be smarter to divert to public transit.

The pilot project has been going on for about five months.

"The predictive capabilities are head and shoulders above what exists today," Day said. "Everything out there is showing you traffic as reported five or 10 minutes ago. Nobody does predictive."

While testing is in California, IBM is intent on building a system that can work around the world.