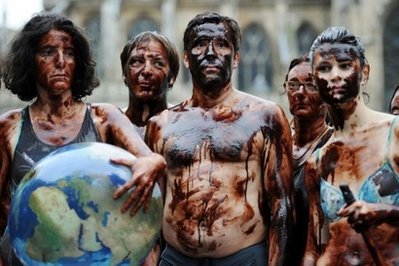 A handful of Greenpeace activists was outside Facebook headquarters on Wednesday, calling on the social network to "unfriend" coal energy for powering data centers and other operations.

Members of the international environmental group set up a large computer screen to display comments streaming in from around the world in response to a Facebook post urging the firm to join an energy revolution.

"We want them to 'unfriend' coal and 'Like' green energy," said Greenpeace spokesman Daniel Kessler, who estimated that a dozen volunteers greeted Facebook employees as they arrived the startup's campus in the Silicon Valley city of Palo Alto.

"We think a lot of Facebook employees will be on our side, so we are trying to recruit them."

The social networking star custom-designed the hardware, power supply, and architecture of a new U.S. data center that is 38 percent more power efficient and costs 24 percent less than the industry average.

Schematics and designs for Facebook's revolutionary data center in the Oregon city of Prineville were made available to the world as part of an Open Compute Project announced by founder Mark Zuckerberg.

Facebook has been in ongoing talks with Greenpeace, meeting with the environmental group as recently as Tuesday in San Francisco, and asked it last week to help promote the Open Compute Project.

"We continue to find this kind of engagement valuable and look forward (to) working with Greenpeace and others to address key environmental issues, including energy efficiency and renewable energy," Facebook said.

Facebook has made a practice of factoring environmental impact into decisions and designs, including its coming move to a former Sun Microsystems campus in the Northern California city of Menlo Park.

"Their efficiency is fantastic," Kessler said. "But it simply isn't enough."

"They should be concerned about coal," he continued. "If we don't stop burning coal, we are not going to stop climate change."

The trend toward music, video, email, social networking and more being offered as services hosted in the Internet "cloud" has Facebook, Apple, Google, Amazon and other technology firms investing in massive data centers.

"What we are seeing is cloud computing, and that takes a lot of power," Kessler said.

A Greenpeace zeppelin towing a banner reading "Facebook: Join the Energy Revolution" was to take to the sky above the company's headquarters on Thursday, weather permitting.