Suu Kyi Meets Clinton in U.S. after Years under Arrest 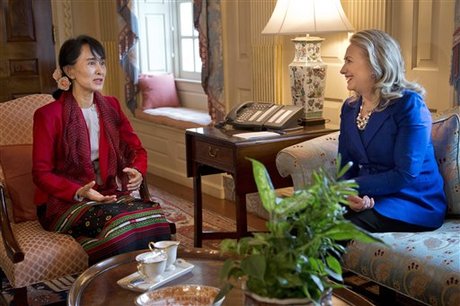 Myanmar's Aung San Suu Kyi made a triumphant debut Tuesday in Washington as she met Hillary Clinton, who voiced excitement at the opposition leader's journey from house arrest to stateswoman.

A relaxed and smiling Suu Kyi, dressed in a red jacket with three small pink flowers pinned to her hair, chatted with America's top diplomat at her office in the State Department at the start of an unprecedented 18-day U.S. tour.

There is "so much excitement and enthusiasm about the fact that you can actually come," Clinton said as two of the world's most recognized women leaders entered talks.

It was the second meeting between the Nobel Peace Prize winner and Clinton, who visited Myanmar in December in an effort to encourage the dramatic reforms underway in a nation that had been ruled for decades by military leaders.

Suu Kyi served 15 years under house arrest until her 2010 release. In a sign of further change, Suu Kyi's National League for Democracy said authorities had released another 87 political prisoners in the country also known as Burma.

The timing was seen as linked to President Thein Sein's own visit to the United States next week to attend the U.N. General Assembly. The former general surprised many observers by embracing reform when he took office last year.

The White House has not commented on whether President Barack Obama will meet Suu Kyi or Thein Sein. Pundits have warned Obama not to meet just with Suu Kyi for fear of slighting the president who arguably has the most control over the future of reforms.

For Obama, who is facing turmoil in the Middle East weeks ahead of elections, Myanmar has been seen as a key success of his initial policy of reaching out to adversarial regimes.

The administration has promised to ease sanctions gradually in return for positive steps from Myanmar. In July, Obama ended restrictions on U.S. investment despite concerns voiced by Suu Kyi about doing business with the state-owned oil and gas firm, which has long been alleged to violate labor rights.

The administration has said that Myanmar still has work to do to improve its record, particularly in its treatment of ethnic minorities such as the Rohingya Muslims who are not even considered citizens.

Suu Kyi enjoys wide respect across the political spectrum in Washington. On Wednesday, she will be greeted by top lawmakers from both parties and former first lady Laura Bush as the opposition leader receives the Congressional Gold Medal, the top honor bestowed by Congress.

Among her nearly 100 events across the United States, Suu Kyi will head on September 25 to Fort Wayne, Indiana, to meet the sizable Burmese community that has resettled in the Midwestern city.

Clinton said the people of Fort Wayne were "eagerly awaiting" Suu Kyi's visit and that she would like to hear more from the Nobel laureate on "how people ended up there, and are living there."

During her 15 years confined to her house in Yangon, Suu Kyi said she had frequently heard on Burmese news about the community in Indiana.

"All sorts of things seem to be happening in Fort Wayne," Suu Kyi said.

Suu Kyi will also head to the states of New York, Connecticut, Massachusetts, Kentucky and California to accept awards, speak to students and scholars, and greet refugees from her country.

The hectic schedule has worried some of Suu Kyi's supporters. The 67-year-old fell ill in June during a punishing tour of Europe.

Suu Kyi has not visited the United States since before the 1990 elections. She worked in New York at the United Nations headquarters from 1969 to 1971.