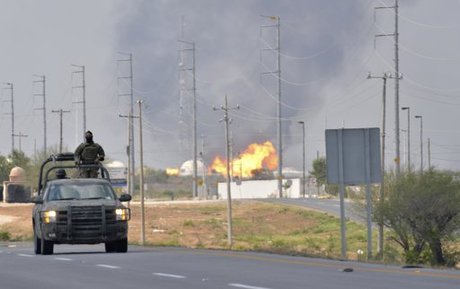 A huge blaze erupted at a Mexican gas plant near the U.S. border Tuesday, leaving 26 people dead, 28 injured and seven missing in the worst accident in two years for the state-run Pemex energy firm.

Television images showed tall flames and plumes of smoke billowing from the site, located near Reynosa, a city in the northeastern state of Tamaulipas that sits across from the Texas town of McAllen.

"Regrettably, the number of workers who died in this morning's accident in Tamaulipas rose to 26," the company said on Twitter, as the toll more than doubled from the 10 deaths that had been reported earlier in the day.

Four of the dead were Pemex workers while the 22 others were contractors, the company said. Pemex later tweeted that another 21 contractors and seven company employees were hospitalized -- of those, two were in serious condition.

A Red Cross worker told reporters earlier that 40 people had been taken to a hospital, with half of them suffering from first- and second-degree burns.

Rescue workers could be seen carrying injured people on stretchers and into ambulances.

The state monopoly said experts were investigating the cause of the fire -- the third incident at a Pemex facility in a little over a month.

Pemex said the fire broke out at 10:45 am (1545 GMT). Workers shut off valves while firefighters spent two hours extinguishing the blaze.

Guillermo Lopez, a contractor who worked with drilling teams and in maintenance areas, said the fire may have started when a tanker truck was filling a storage tank.

"One of the safety valves attached to the supply hose may have failed, creating a spark that turned into two explosions," Lopez said.

A pipeline and control valves were damaged by the fire and specialists are examining them, according to Pemex.

The damaged plant receives gas from the Burgos basin and distributes the product to Pemex's gas and petrochemicals unit.

On August 13, an explosion rocked a refinery in the Tamaulipas city of Ciudad Madero, and on the same day a fire broke out at a pipeline in the central state of Hidalgo after thieves apparently tried to steal diesel from it. No injuries were reported in either incident.

The previous worst incident took place in December 2010, when an oil pipeline exploded after it was punctured by thieves in the central town of San Martin Texmelucan, leaving 29 dead, injuring more than 50 and destroying 32 homes.

In October 2007, 21 Pemex workers died during a gas leak on an oil platform in the Gulf of Mexico. Most drowned when they jumped into the sea in a panic.

Pemex, which accounts for 40 percent of Mexico's government revenue, was once the world's fourth biggest oil company.