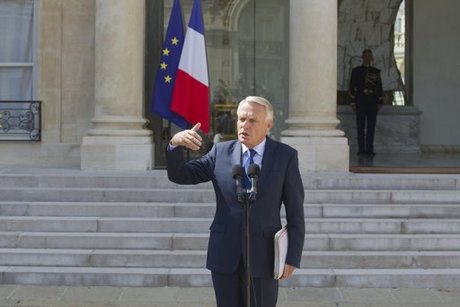 French Prime Minister Jean-Marc Ayrault said Wednesday anyone offended by cartoons of the Prophet Mohammed published in the French satirical magazine Charlie Hebdo could take the matter to the courts.

But he emphasized France's tradition of free speech. "We are in a country where freedom of expression is guaranteed, including the freedom to caricature," he said on RTL radio.

The cover of Charlie Hebdo shows a Muslim man in a wheelchair being pushed by an Orthodox Jew under the title "Intouchables 2", referring to a French film about a poor black man who helps an aristocratic quadriplegic.

"If people really feel offended in their beliefs and think there has been an infringement of the law -- and we are in a state where laws must be totally respected -- they can go to court," Ayrault said.

He also said a request to hold a demonstration in Paris against the controversial U.S.-made anti-Islam film which has sparked furious protests across the Muslim world would be refused.

He said the request had been lodged but would be turned down "because there is no reason to allow conflicts that do not concern France into our country".

Charlie Hebdo is no stranger to controversy over its handling of issues relating to Islam.

Last year it published an edition "guest-edited" by the Prophet Mohammed that it called Sharia Hebdo. The magazine's offices in Paris were subsequently fire-bombed.

Excellent, should have this Frenchman as prime minister in the UK or president of the USA.