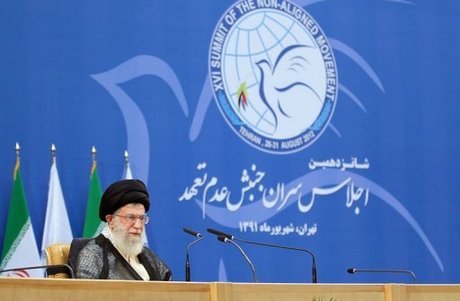 Iran will never bend to pressure exerted by the world's big powers, even if they become "angry" at its defiance, supreme leader Ayatollah Ali Khamenei said in a speech published on his official website on Wednesday.

The Islamic republic "does not accept the demands of any superpower," he told an audience of military personnel and their families in the speech delivered on Tuesday in northern Iran, according to his website, www.leader.ir.

Iran, he said, "makes its decisions solely based on the interests of its people and the country, even if all of the world's powers get angry at its decisions."

Khamenei also accused Western and Israeli media of playing up the pain of sanctions against his country's economy and urged Iranians to ignore such reports.

"Drawing a black and dark picture of the country's situation is the known method of Western and Zionist media aimed at halting the Iranian nation's path," he said.

The five permanent members of the U.N. Security Council (the United States, Britain, France, China and Russia), plus Germany, are negotiating with Iran to curb its disputed nuclear programme.

At the same time, the Security Council and the West have imposed successive sanctions on Iran to force it to comply.

Tensions have soared in recent weeks, with Israel threatening military strikes against Iran's nuclear facilities, Tehran accusing the U.N. nuclear watchdog of maybe being infiltrated by "terrorists and saboteurs" intent on doing it harm, and the United States deploying military hardware and leading war games of unprecedented scale in the Gulf.

The powers negotiating with Iran are urging it to suspend higher level uranium enrichment, to ship out its existing stocks of that enriched uranium, and to close a near bomb-proof enrichment bunker in Fordo.

U.S. and EU sanctions are taking a simultaneous toll on Iran's economy by reducing its vital oil exports, creating hardship for both the government and ordinary Iranians.

Iran has repeatedly vowed never to cede to the dual-track pressure. It denies Western allegations its nuclear programme includes any military ambitions.

Khamenei, who is also Iran's military commander-in-chief, has called the possession of atomic weapons a "great sin."

If someone told me the economy is bad, while I am making millions, why would I listen to the media. But when I am on the streets broke, then the media is right.

iraq said the same thing that nobody tells them what to do and look what happened there.their leaders are about as bright as a burned out liht bulb.