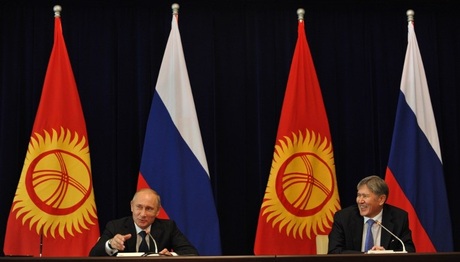 President Vladimir Putin on Thursday agreed a deal with Kyrgyzstan that will allow Russia to keep a military base in the country until 2032 as Moscow and Washington jostle for influence in the region.

The agreement -- essentially a set of memorandums of intent ahead of formal treaties -- also foresees Russia wiping out nearly $500 million (380 million euros) in debt owed by Kyrgyzstan, a significant sum for the central Asian ex-Soviet state.

Landlocked Kyrgyzstan is the only nation in the world to host both Russian and U.S. bases. Both Moscow and Washington are seeking to extend their presence in the former Soviet republic following the ousting of president Kurmanbek Bakiyev in a bloody revolution in 2010.

The agreements signed during Putin's visit include a document spelling out the terms for the presence of Russia's Kant base and another document to settle Kyrgyzstan's debt to Russia.

A source in the Kyrgyz government told Agence France Presse Russia would be able to keep its base in the country for another 15 years after 2017.

"A new document should be developed by 2017," the source said, adding the agreement could then be extended every five years.

Kyrgyzstan is also home to a U.S. air base which is a vital transit point used to ferry troops to Afghanistan, refuel warplanes and evacuate wounded soldiers.

The current lease on the Manas air base expires in 2014, and U.S. Defense Secretary Leon Panetta travelled to Kyrgyzstan in March in an effort to persuade the government to leave the door open to renewing access to the base after 2014.

Speaking to reporters, Kyrgyz President Almazbek Atambayev confirmed that his government would like to turn the Manas base into a civilian airport after 2014, while Putin sought to stress that the fate of the U.S. base was not the subject of Thursday's talks.

He indicated however that Moscow was ready to help turn the Manas airbase into a profitable civilian facility.

"We are ready to help fill it up with concrete economic substance," Putin told reporters, adding that the Russian military presence would be a "significant stabilizing factor" in the region.

"I think the U.S. base in Kyrgyzstan is here to stay for a long time," he told AFP.

"The fate of the Manas airbase will be decided by Russia and the United States and depend on how events in the Middle East as well Afghanistan will play out," added political analyst Mars Sariyev.

The Bakiyev regime had sought to drive a hard bargain with Russia and the United States, seeking to play the two countries against each other.

The deals signed Thursday also include an agreement to revive Soviet-era hydropower projects that envision the construction of the Kambarata-1 plant and also a facility on the Naryn River running through Kyrgyzstan and Uzbekistan.

"These are big, serious multibillion-dollar projects, which -- I would like to stress that -- will develop the republic's economy, create new jobs, and raise the standard of living of Kyrgyz nationals," Putin said.

The use of water resources in Central Asia is a hugely divisive issue, with Uzbekistan relying on the rivers to irrigate its farmland.

Putin invited Uzbekistan and Kazakhstan to participate in the projects.