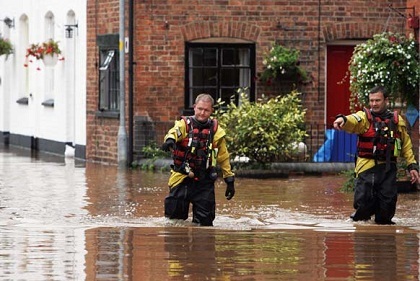 Swathes of northern England were struggling to hold back flood waters on Tuesday after a historic market town was swamped following a second day of torrential rain.

Dozens of people were evacuated from their homes in Morpeth, Northumberland, in northeast England before the River Wansbeck overwhelmed flood defenses and the waters swept large tree trunks down the river.

Flooding caused severe disruption to roads and railway lines across the north of England and Wales, including the East Coast Mainline which links London with Leeds, York and Newcastle.

Some areas experienced more than a month's rain in 24 hours and forecasters warned that more was on its way.

The Met Office said it expected further downpours in northern England and north Wales on Tuesday, with 25 millimeters to 50 millimeters (one to two inches) set to fall in some places.

By midday (1100 GMT), the Environment Agency had issued 73 flood warnings for rivers, and more than 150 less serious flood alerts.

David Jordan, director of operations at the Environment Agency, said: "Our teams have been out around the clock over the last few days to minimize the risks and prepare for flooding.

A woman was killed in the world-renowned Kew Gardens in London on Sunday when she was hit by a tree branch which broke off in rain and high winds.