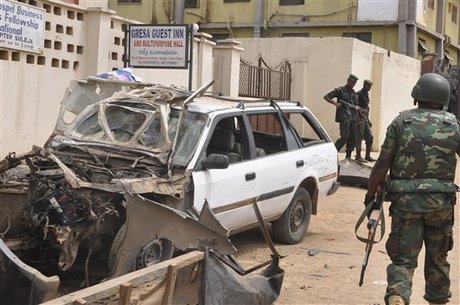 Nigeria's military said Tuesday that it has killed a senior Boko Haram Islamist leader and arrested 156 suspected members of the group during a weekend raid in northeastern Adamawa state.

"In the three-day operation, the town was placed under 24-hour curfew, which enabled soldiers to comb the nooks and corners," said Lieutenant Saleh Mohammed Buba, military spokesman in Adamawa.

"A total of 156 suspects were rounded up in raids of suspected (Boko Haram) hideouts. A sect commander known as Abubakar Yola who went by the alias Abu Jihad was shot dead in a shootout while trying to flee," he added.

The operation was carried out in the town of Mubi, not far from the city of Maiduguri in neighboring Borno state, which is considered the base of the Islamist group that is blamed for killing more than 1,400 people in Nigeria since 2010.

The military has claimed a series of successes against the group during weekend operations in several cities in the northeast, the epicenter of the Boko Haram insurgency.

Like Mubi, Damaturu was placed under round-the-clock curfew ahead of the military operation.