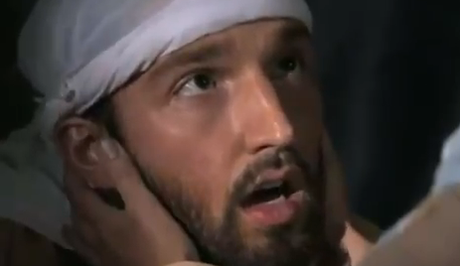 A Pakistani government minister who offered $100,000 for the death of a film-maker who produced an anti-Islam movie stood by the bounty Tuesday, saying it was the "only way" to stop insults to the prophet Mohammed.

Railways minister Ghulam Ahmed Bilour sparked international condemnation when he offered the blood money and urged the Taliban and Al-Qaeda to carry out what he called the "noble deed".

The Pakistan government and Bilour's own party have distanced themselves from the reward for the person behind the crudely-made "Innocence of Muslims", which has sparked violent protests across the Islamic world.

But Bilour insisted public opinion was behind him in Pakistan -- which has seen dozens of protests against the film including nationwide rallies on Friday that ended in bloodshed and looting, with 21 people killed.

"I expressed my personal view and faith. I stand by my declaration," the 72-year-old told Agence France Presse.

"My faith is non-violent, but I cannot forgive and tolerate (this insult)."

He said a businessman from the eastern city of Lahore had offered to put up a further $400,000 for the reward and said that freedom of speech should not be used as an excuse to insult Islam.

"Killing is not a good way, but right now it is the only way, because no action has been taken from Western countries (against the film-maker)," he said.

Washington condemned Bilour's reward offer as "inflammatory and inappropriate", while the EU said it deplored it, but the minister, regarded as one of the most influential politicians in Pakistan's deeply religious northwest, where anti-Western feelings run deep, said he was surprised by the outrage.

"I issued a statement against one man, not against all European and American people," he said.

He warned of a "volcano of Muslims" and a "religious war" if insults to Islam continued unchecked.

The producer of the film, Nakoula Basseley Nakoula, is reported to be a 55-year-old Egyptian Copt and convicted fraudster, based in Los Angeles and currently out on parole.

U.S. reports say Nakoula wrote and produced the film, using the pseudonym Sam Bacile before being identified. Police questioned him before he went into hiding with his family.

The minister came under fire from liberal sections of the Pakistani media, with the English-language Daily Times newspaper criticizing him in an editorial titled "Bilour's foolishness".

"If Bilour is allowed to get away with his diatribe, what will remain as the difference between him and the frothing-at-the-mouth extremists and terrorists?" it said.

Most of the country's Urdu-language papers, generally less liberal and more popular, did not criticize him, and on Monday groups of people came to his home to congratulate him for taking a stand.

"You see, this was brought by people and they garlanded me with flowers," he told AFP, indicating a table full of red roses on a verandah in front of his house in Peshawar.

"People are even calling me and telling me that I should increase the amount of the reward."